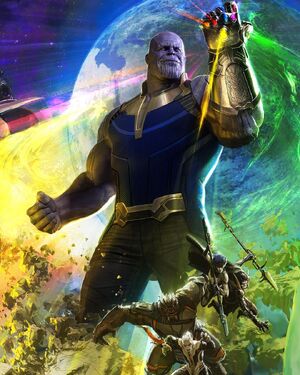 Jim Starlin
Thanos is a cosmic-level super-villain originating from Marvel comics and a mutant member of the Titan Eternal subspecies with deviant traits, he is known as one of the most evil characters in the Marvel Universe and has displayed godlike abilities in numerous attempts to either conquer or destroy reality: his many evil deeds earning him the title of the "Mad Titan".

For a long time, Thanos was a nihilist who sought to court Death itself and when he gained the power of the Infinity Gauntlet he became a malevolent God who wiped out a full half of the Marvel universe and waged war with its Cosmic Entities.

This version of Thanos wasn't so much killing, simply out of nihilism, but rather a well intentioned extremist trying to prevent overpopulation of the universe and the depletion of its resources. 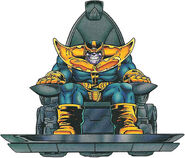 Add a photo to this gallery
Retrieved from "https://aliens.fandom.com/wiki/Thanos?oldid=194188"
Community content is available under CC-BY-SA unless otherwise noted.