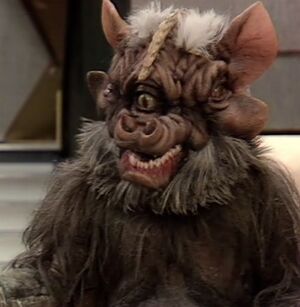 Tetraps are a sapient mammalianoid species from the planet Tetrapyriarbus. They are bulky, hirsute, bat-like humanoids with four eyes positioned around the head: one on the face, one on the back, and one on each side. They also have four ears – the upper pair facing forwards and the lower one facing backwards – and membranous flaps under their arms, which probably represent vestigial wings. Tetraps are not able to fly (at least not under the Earth-like gravity pull of Lakertya) but do hang upside down on ceilings much like regular bats. They have a tubular tongue which can be used to inject a paralyzing toxin and to feed on blood plasma from their victims.

A group of Tetraps have at some point become servants of the Rani, a malevolent renegade Time Lady. After discovering that the Rani would have no regards in letting the Tetraps be destroyed during her experiments to create a time manipulator; the creatures rebelled against her, taking control of the Rani's TARDIS and leaving Lakertya to return to their homeworld.

Retrieved from "https://aliens.fandom.com/wiki/Tetrap?oldid=110768"
Community content is available under CC-BY-SA unless otherwise noted.