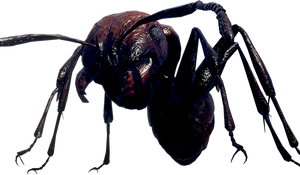 All soldier Ants are born from a single queen, in the form of large eggs within anthills.

Earth Defense Force
Terror Ants, otherwise simply known as just Ants are a giant, biomechanical species of insect created by the alien race known as the Ravagers in order to attack and conquer Earth. They are the most common known enemy throughout the Earth Defense Force franchise, and the main form of weapon used on humans for the years since their first attack.

As the name implies, Terror Ants hold the main physical anatomy mirroring that of normal ants, most commonly Black Ants. They have six legs, two segments to their body, and a large head with small pincers for mouths. What sets them apart however is their size, which can easily reach upwards of several dozen meters, outsizing most life on Earth. Physically speaking though, they are by far the weakest of the Ravager's creations.

While commonly found in black, several mutated variants have notably different colorations compared to their regular counterparts thanks to the work of the Ravager's mutations. Any and all soldiers are capable of spraying a orange-colored acidic liquid at their enemies, and also able to bite at close range to eat creatures.

Colonies of Terror Ants can easily exceed in the hundreds like normal ants do, causing devastation to cities as they travel around their territory.

Queens and the undisputed rulers of Terror Ant hives. These Ants are not only much larger than typical Terror Ants, but they also sport a set of insect wings, which in turn give them the ability to fly. Queen Ants can grow to the size of a skyscraper, and are just as deadly, if not deadlier than, their soldiers. Like normal ants, Queens are mothers to all soldiers, queens providing reproduction and having numerous amount of Terror Ant eggs at a time.

They too are capable of shooting acid at enemiesGo.

Golden Terror Ants are a mutated variant of Terror Ant used by the Ravagers during the year 2025 on their attacks on Earth. These golden creatures mirror their Terror Ant relatives, but are brightly yellow in coloration and almost give off a shine like the gold they represent.

Many of its fighting abilities exceed its normal relative by a large amount; having a higher distance range of attack, has an even more lethal power, and is a lot more durable than normal ants.

While they lack in power, they make up for in speed, them being the fastest of the Terror Ants. Along with that, their acid is more potent and can erode buildings.

Retrieved from "https://aliens.fandom.com/wiki/Terror_Ant?oldid=152567"
Community content is available under CC-BY-SA unless otherwise noted.