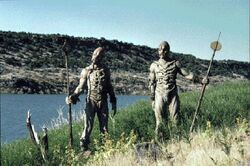 The Terrians are a species of sapient subterranean bipeds indigenous to the planet G889, known to Human colonists as "Earth 2".

They possess psychic abilities and are noted to be only capable of communicating with the Human colonists through a dreamscape that few of them understand; this may be a way for them to communicate with the other sapient races on the planet to bridge the gap between languages or may be their only true form of communication.

They quickly establish a communication with the Humans by connecting into Alonzo Solace's dreams. Not long after, they cure the syndrome affecting Ulysses Adair.

They lead a tribal society and appear to have a symbiotic relationship with the planet itself.

Terrians are tribal creatures who live underground and count among their powers the ability to travel through solid earth. They have two primary modes of communication: through a trilling, almost whale-like song, and through dreams. Unlike humans, they don't view themselves as individuals, but rather as extensions of the planet, whose molecular composition is virtually indistinguishable from their own. Thus they often think and move in unison, as if controlled by a single mind. They are peaceful beings, but will act ruthlessly to protect the planet, which they consider their "mother". Their weapon of choice is the lightning staff -- a wooden pole topped with a rare mineral that channels and directs electrical energy from the planet into bolts of lightning.

Retrieved from "https://aliens.fandom.com/wiki/Terrian?oldid=173950"
Community content is available under CC-BY-SA unless otherwise noted.