Alien Species
Register
Don't have an account?
Sign In
Advertisement
in: Octopedal Species, All Tomorrows Universe, Descendants of Man,
and 8 more 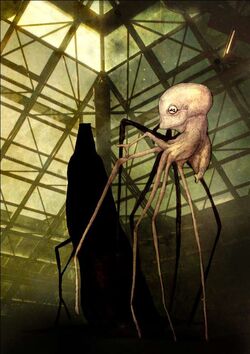 Many worlds across the Milky Way

Created by the Asteromorphs from themselves

Extinct by the time of the Author

Nemo Ramjet
The Terrestrials, or Terrestrial Spacers, were a posthuman species that was created by the Asteromorphs from themselves to supervise the new worlds populated with descendants of the Subjects and prevent another genocide like that of the Gravital.

Compared to the Asteromorphs, the Terrestrials had stronger limbs (actually modified fingers) that can be used for walking; and smaller brains (because the Asteromorphs' giant brains wouldn't be practical in gravitation). Compared to the new Subject-civilizations, they were still demigods and superior in every sense.

Some of the civilizations rebelled against their Terrestrials, which often led to their destruction at the hands of Asteromorphs and Terrestrials.

Even the Terrestrials did not always follow the wise plans of the Asteromorphs, and some of them played god, formed religions around themselves and exploited their Subjects. While this wasn't especially ethical, it still resulted in more stability than actively upbringing the new civilizations.

As the new empire was spanning the whole of the Milky Way, the humans tried to make contact with the indigenous folk of the surrounding nebulae, while still being cautious because of their history with alien invasions, remembering the Qu as well as the invaders that had attacked the Bug Facers.

After some time, they found another civilization in the form of a diverse empire ruled by the Amphicephali. Like the posthumans, the Amphicephali had a rich and diverse history and were cautious, but both species finally proved to be mature enough to make contact peacefully. They were the first species to peacefully make contact with humanity, but not the last.

Together, the united galaxies eventually destroyed the Qu, cradled their suns with artificial shells, criss-crossed interstellar space with wormholes and made travel a thing of the past. One day, a researcher rediscovered Earth, humanity's ancestral home, which had been abandoned 560 million years before because it was too far away from the main centers of population.

By the time of the All Tomorrows afterword, all of humanity has disappeared for unknown reasons. Perhaps it went extinct through a war or the empire slowly fell apart, leaving single colonies to face their own fates. Perhaps it was a mass migration to another plane of existence. The nonhuman Author of the book doesn't know.