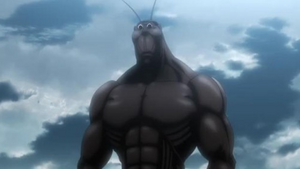 Terra Formars
The Terraformars are a sapient species of humanoid mutant cockroaches.

The Terraformars are human-sized cockroaches bearing a physical resemblance to Homo erectus. They have wings, which grants them the ability to fly.

In an international effort to terraform Mars for human habitation, cockroaches with some moss were sent on Mars. The plan was for the cockroaches to feed on the moss and and promotes the moss's growth with their carcasses thus creating a viable atmosphere. Five hundred years later, when the humans from the shuttle Bugs 1, revisited Mars the cockroaches had evolved, possessing human like appearance.

The scientists were slaughter but not before the last remaining member sending a head of one of the creatures to warn Earth. In retaliation, Earth created the Bug Procedure to enhance humans with insect traits to fight the cockroaches or Terraformars and reclaim Mars. Abroad Bugs 2, a team of desperate volunteers and convicts were sent to Mars, but unfortunately majority of the team were killed by the overwhelming numbers of Terraformars. From the incident only two members of the crew managed to escape back to Earth.

Forty-two years after the Bug 2 tragedy, the A.E. Virus began to manifest and spread throughout Earth. The main culprit was believed to be the Terraformars virus carrier. An international effort was made to send a third mission, Annex I, to extract fresh Terraformar samples to create a vaccine. However the virus turned out to be a international conspiracy and possibly man-made. The reason for sending the mission to Mars was not for a vaccine but to harvest the Mosaic organs. Organs that allowed humanity to splice the DNA of other animals to create more powerful warriors. It was the intent of many nations to acquire these organs from the Terraformars to create a new super-soldiers for their militaries. The Terraformars were informed amount the Annex-I project through collaborators from China and the Newton Clan, a family obessed with eugenics, via simple drawings from a space capsule.

What was suppose to be a humanitarian effort devolved into a proxy war on Mars by the various nations. The humans from Annex I soon learned that the Terraformars had undergone major social reorganization and biological evolution. Now sporting more diverse forms using the pilfered Bugs Surgery as well as leftover Earth technology, the Annex I were assailed on many fronts. To make matters worse the Terraformars had quickly adapted to the new Mosiac Operation and quickly stole the new abilities from their human victims.

In the story its later revealed that the Terraformars had long since infiltrated Earth by using the discarded Bugs-1 shuttle. They blended within human society and kept tabs on the Annex-I project. When it was launched the Terraformars on Earth sent their agents to sabotage the mission. This coincided with China's and Romania plan to steal as many Mosaic Organs from the mission while leaving the rest of the Annex crew to die.While the human proxy forces fought on Mars, the Terraformars used the Bugs-2 to land on Earth and despite many attempts by the Earth's paramilitaries made landfall thanks to the Earth borne Terraformars sabotaging their efforts.

The Terraformars that landed composed of several evolved strains that were mostly leaders. After building a base in Antarctica, they later formed a cooperation with China and the Newton Clan. Together they began kidnapping several Japanese citizens for breeding experiments in which their efforts created several Terraformar hybrids with human DNA. After their presence was discovered by the Japanese mercenary service, the 1st Escort, their breeding operations destroyed. The Terraformars officially revealed themselves to the world, launching and open war against Japan and humanity.

The Terraformars are naturally animalistic, on an individual level, however as a group they are highly social and intelligent. These cockroaches have an intense hatred towards humanity, killing any human onsight with brute force. However they are capable of showing restraint, when under the leadership of a strong leader.

The Terraformars' social structure is complicated and yet simple. They do not possess a hive mind, but merely a hive mentality. They are all individuals yet they are shown to work as units of a larger body when given the right impetus to direct them. Under a charismatic Terraformar these creatures are capable of achieving impressive feats of social organization and networking.

Their unity and cohesion sets them from humanity as they are able to work as one without strife or conflict of interests. However it is also their greatest weakness, should their leader fall, the whole Terraformars' social structure collapses and they revert from using complex tactics to mere simple mobs. The confusion left by the power vacuum is only temporary, as it will be resolved within a few days or even hours, when the Terraformars elect a new replacement and reestablish order.

The Terraformars prioritize their targets into four categories on who they will attack. The first is anyone who's holding an item (those with weapons are usually their favored choice of target). The second are those who are alone. The third is anyone who's injured and the fourth are female targets. The reason for the last priority are unknown, as the attack is not sexually motivated as Terraformars lack sex drives, but its possible that Terraformars attack females to eliminate the human potential to expand their numbers in the long run.

They are incredibly intelligent creatures, possessing innate knowledge on tools, advanced techniques, and strategies. By the time Bug-2 landed on Mars the Terraformars managed to develop flake tools to create clubs and even use firearms. By the time Annex-I arrived they had organized themselves into a tribal unit with clear hierarchies and multiple ranks of Terraformars with Bugs Surgery enhancements. They also used the leftover silkworms from Bugs-2 to raise the worms as food and even make clothing.

Retrieved from "https://aliens.fandom.com/wiki/Terraformar?oldid=188942"
Community content is available under CC-BY-SA unless otherwise noted.