Alien Species
Register
Don't have an account?
Sign In
Advertisement
in: Humanoids, All Tomorrows Universe, Extinct Species,
and 7 more 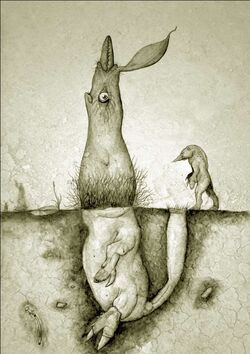 Females were about 2 meters high; males much smaller

Created by the Qu from a colony of the Star People

Nemo Ramjet
The Temptor were one of the posthuman species created by the Qu from a colony of the Star People.

They were created by the Qu as living decorations and survived after their departure, even though it's unknown how they did it. Their most distinguishing features were their extreme sexual dimorphism and eusocial nature.

The females were about 2 meters high cones of flesh with a beak on the top and a pair of eyes on their sides. Half of their body was buried in the ground, including their useless limbs. Their tubelike vaginas reached to the surface. Despite their immobility, they were rather intelligent creatures.

The males were much smaller than the females and had humanoid bodies with beaked mouths. They were unintelligent and could be controlled by the females through vocal and pheromonal signals. With this method, the females manipulated the males into bringing them food, defending them from predators and doing other tasks for them.

The female only mated with the strongest and most obedient males, who had to enter the female's tubelike vagina during the mating. Most offspring were male, but in certain periods they would give birth to female offspring. Those were planted somewhere else by the males.

Before they could develop some kind of civilisation, the Temptors were destroyed by a meteor that hit their homeworld.