Alien Species
Register
Don't have an account?
Sign In
Advertisement
in: The Maw Universe, Sapient Species, Creatures of Unknown Origin,
and 5 more 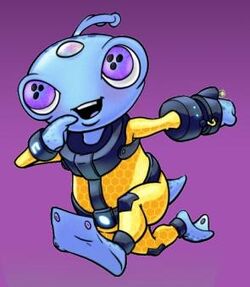 The Maw
Teltarians are a technologically-advanced species of peaceful sapients whom have amazingly avoided both war and evil, and hence know neither. They naturally produce psychic emanations thanks to the stones embedded in their heads, which are mood indicators for their species. These have no effect on other Teltarians yet cause emotional disturbances in other lifeforms for unspecified or unknown reasons. It is for these abilities that their race has been quarantined by the Galactic Council. It is of note that these emotional disturbances may affect all Maw in a way to make them loyal to their species, similarly to how The Maw became loyal to Frank instead of consuming him, which is what it would have naturally done otherwise. However, in assisting The Maw's overall growth and escape, Frank has committed a galactic felony, therefore, by Galactic Federation law, is to be found and exterminated immediately.
Community content is available under CC-BY-SA unless otherwise noted.
Advertisement