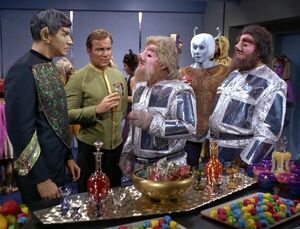 Star Trek
The Tellarites are a space-faring humanoid race native to planet Tellar Prime. They are one of founding members of the United Federation of Planets, along with Humans, Vulcans and Andorians.

Tellarites can be described as stout and hirsute beings, having bushy hair, beards, thick eyebrows and large quantities of body hair, including on their hands, which have three hoof-like fingers. They also have a porcine snout and their eyes are hidden in deep eye sockets. They feel more comfortable in warm settings and consider Human standard temperatures to be cold.

Tellarites are usually regarded as cranky and bad-tempered, and are famous for their love of arguing, which is even considered a sport on their homeworld.