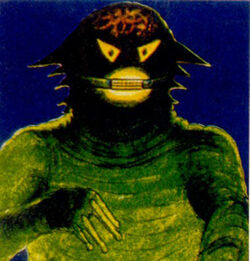 The Teetonians, a.k.a. Zanfretta's Aliens, are a sapient extraterrestrial species allegedly first sighted by 26-year old night watchman Pier Zanfretta on the evening of December 6, 1978, in the vicinity of Torriglia, northern Italy. According to Zanfretta, these aliens hail from the planet Teetonia, located in what is referred to as the "third galaxy" (possibly referring to the Triangulum Galaxy).

Zanfretta described his captors as monstrous beings, about 3 meters tall, and covered in green hairy skin which has been described as hanging loose, "as though he were very fat or dressed in a loose, gray tunic". They also seem to have pointed structures, akin to spikes or crests, growing on the sides of the head. Their triangular eyes are yellow and a number of red veins are visible on their foreheads. Their fingertips are rounded, perhaps resembling those of an amphibian.

The Teetonians don't breathe oxygen, and in fact require a different atmospheric composition from Earth's, as evidenced by them making use of a breathing apparatus to cover up their mouths while on the planet.

Zanfretta's first encounter with these aliens happened at about 6 p.m. of December 6, 1978; shortly after his car's engines, lights and radio inexplicably died out at the same time. From the garden of the currently unoccupied cottage of his client, Dr. Ettore Righi; Zanfretta saw four moving lights, which he promptly assumed to be the flashlights of intruders. However, as he approached to catch them, the watchman was instead confronted by extraterrestrial beings.

After this original incident, Zanfretta ended up being abducted by the Teetonians, not once, but several times over. His experiences; recalled during subsequent sessions of hypnosis; included being brought to a hot and luminous place where he was both interrogated and examined. The aliens' speech was understandable to him thanks to what he described as a "luminous device" which was used as a translator. In one of the sessions, Zanfretta ominously revealed that "they want to talk with us and that they will soon return in larger numbers".

Retrieved from "https://aliens.fandom.com/wiki/Teetonian?oldid=182286"
Community content is available under CC-BY-SA unless otherwise noted.