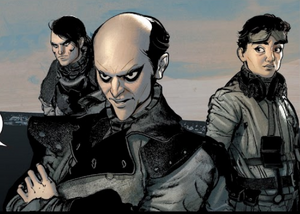 Sonata
The Tayans are an alien race from the planet Taya.

Tayans are humanoid, similar to the Ran, though they are predominately black-haired with arched unswepted brows.

Tayans are an aggressive militant culture, but are more technologically capable. Their level of technology is equivalent to the early 20th century. Highly suspicious and xenophobic, Tayans hold the believe of superiority of their species and others to be lesser. The Tayans hold the belief that violence is the only course of action, and no word for comprise exists in their language and accept no surrender only victims. Warriors that show cowardice are not given proper burials. Despite their negative traits Tayans do possess an honor code of sort.

The Tayans worship a collection of gods; some believing that the Sleeping Gods of Peridta are them. In one of their creation myths it was said that in the beginning two great warrior gods fought in the depths of space. When the death blow was finally struck the blood from the dying god flew across the void of space. Two drops of blood reached Taya. Where they landed, two warriors sprang up...one male, one female... but due to their blood of the warrior gods it defined their nature and attacked on another with glorious savagery. For a hundred cycles they fought only pausing to make weapons to defeat one another. They stopped realizing they were evenly matched and soon mated and engendered the warrior race of Tayans.

Retrieved from "https://aliens.fandom.com/wiki/Tayan?oldid=182004"
Community content is available under CC-BY-SA unless otherwise noted.