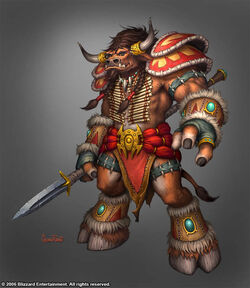 Warcraft Universe
Tauren (shu'halo in their native language) are huge nomadic creatures who live on the grassy, open plains of Mulgore in central Kalimdor. Tauren are large, muscular humanoids and bovine in appearance, complete with hooves and horns. They stand up to nine feet tall and weigh anywhere from 400 to 700 pounds. Their immense bodies are covered with fine, short fur that ranges in color from black to gray to white to red to brown to tan and any mottled combinations or variations thereof. After generations of nomadic existence, the tauren have recently made permanent settlements in Mulgore and the Barrens.

Tauren are large, muscular humanoids with bull-like heads. They are mostly muscle, having incredibly developed physiques and brawny frames most suitable for combat. Soft, downy fur (usually quite short) covers the tauren body, with manes growing along the head and neck, the lengths of the arms, and the shins. Tauren men and women almost always wear their hair long, and the males prefer braids to any other style. Coloration can range from solid black to blond and even to white, or mottled pelts with a range of spots and different colors. They have three fingers on each hand.

Horns are most prominent on males, although all tauren have horns. Tauren wear natural clothing — leather or hide, and some cloth. They prize jewelry, designing fine trinkets of ivory, bone and amber. From these materials they make bracelets or necklaces, and sometimes adorn their horns or locks with such beautiful displays of artistry.

Tauren have a long and complex oral tradition that has been handed down for generations. Since almost no written record exists of tauren history, the accuracy of their tales is unknown. Regardless, many of their stories provide the only known account for several events in history, and so these stories must be regarded as having at least some believability. The tauren race is presumed to be as old as the night elves since both races are said to have awoken during the creation of the world, and much like the elves, they have a strong attunement to nature. Thus, their society is largely based on shamanism. They live to serve nature and maintain the ever delicate balance between the wild things of the land and the restless spirits of the elements. In addition, elements of druidism have been recently incorporated into tauren society, further highlighting their service to nature.

Though the noble tauren are peaceful in nature, every tauren, warrior or otherwise, seeks identity as both a hunter and as a child of the Earthmother. Tauren seek to prove their bravery by setting themselves against the creatures of the wild. Despite killing the animals, the tauren are taught never to waste anything given to them by nature and to give back what they can. They learn the fine balance that exists in nature and that if they honor the Earthmother, she will bless them in return.

Despite their enormous size and brute strength, the remarkably peaceful tauren cultivate a quiet, tribal society. However, when roused by conflict, tauren are implacable enemies who will use every ounce of their strength to smash their enemies under hoof. They are noble and proud and have never, despite significant adversity in the past, succumbed to their enemies. Like the orcs, the tauren now struggle to retain their sense of tradition and noble identity.

For the tauren, nature is the mother of the world, and their faith holds a deep and resonant tone within their hearts. Tauren are connected to the ebb and flow of the world. They revere the spirits of the land and of their ancestors, and they turn to these spirits for wisdom and guidance. This connection manifests in their deeply animistic culture, where druids and shamans stand side by side with warriors and hunters. Tauren do not see a separation between the veneration of nature and the hunt; to hunt is to honor the spirits of nature.