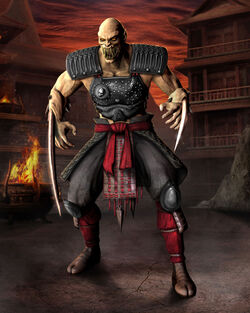 Mortal Kombat
The Tarkatans are an interracial breed of warriors, a mix of Humans from Outworld and Demons from the Netherrealm.

They have long pointy teeth, large mouths, and blades protruding from their bodies, made from organic bone seemingly looking like metal blades. The blades are bigger and stronger coming from the arms.

Tarkatans are typically recognised as the foot-soldiers of Outworld, forming the bulk of Shao Khan's armies in his conquest of numerous realms. When the armies of Outworld set their sights on Earth, the Elder Gods imposed the Mortal Kombat tournament in order to give Shao Khan's conquests a chance to defend themselves. In order to claim Earth for his dominion, Outworld needed to select a handful of champions to compete win 10 consecutive fighting tournaments against Earth's selected champions. The Tarkatan general, Baraka, was among these champions during the tenth tournament, but was eliminated from it by Johnny Cage, a hollywood actor who not only believed the tournament to have been a staged event, but even mistook Baraka for a human in a costume.

In order to subvert the rules of Mortal Kombat, Shao Khan sought to host another tournament on Outworld, sending a horde of Tarkatans to attack Earth until they agreed to his proposition. Baraka fought in this new tournament, but was eliminated quickly by Jaxon Briggs. For the remainder of the tournament, he oversaw the armament of the Tarkatans with Human weapons supplied by the Black Dragons arms dealers. During this time, the sorcerer Shang Tsung created Mileena, a hybrid of Edenian and Tarkatan,to be Shao Khan's heir. Despite losing this new tournament, Shao Khan was convinced by the Demon sorcerer Quan-Chi to conquer Earth anyway. Tarkatans equipped with Human weaponry formed the bulk of this invasion army, reinforced by Tormentors, Centaurians, Shokan, and Lin-Kuei Cyborgs. This invasion was halted when Shao Khan was defeated by the thunder god Raiden and destroyed by the Elder Gods for violating their laws.

Over the course of the next 20 years, Outworld became embroiled in civil war between Kotal Khan, Shao Khan's successor, and Mileena. While Kotal Khan's army was primarily comprised of Oshtek, Mileena's was largely made up of Tarkatans, their loyalty likely owed to their previous ruler Shao Khan as well as Mileena's partial Tarkatan heritage.

Baraka is their leader, and Mileena is half-Tarkatan as well. The Tarkatans are a nomadic species, mainly populating Outworld's wastelands, but it's discovered that they come from the Netherrealm and migrated to Outworld. This race possesses a love for battle and serves whomever is in command (Shao Kahn, the Deadly Alliance, etc.).