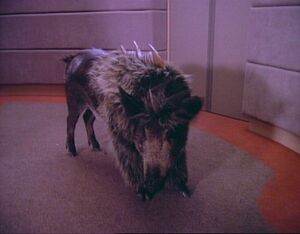 About the same of a dog or a small boar

Either carnivorous or omnivorous

Star Trek
Targs are non-sapient mammaloid creatures which resemble Earth's boars but possess several spikes on their heads and backs. These aggressive beasts are native to the Klingon homeworld of Qo'noS and are commonly hunted, domesticated for food or kept as pets by Klingons.

Targs greatly resemble two other creatures domesticated by Klingons, namely the warrigul and the Jackal Mastiff. It seems more than likely that these creatures do not represent three different species, but rather three different breeds or subspecies of the same species.

Retrieved from "https://aliens.fandom.com/wiki/Targ?oldid=166193"
Community content is available under CC-BY-SA unless otherwise noted.