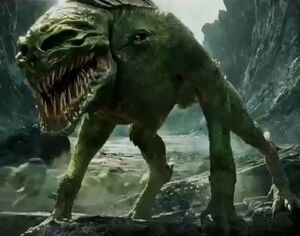 The Great Wall
The Tao Tei are a reptilian race from an unknown world that invaded Ancient China.

The Tao Tei are green-skinned, carnivorous quadrupeds, similar in appearance to canids and similar carnivore mammals. They possess membranous head frills which resonate, allowing them to communicate with each other over long distances. These beasts possess elaborate motifs on the crests of their skulls, which gave the inspiration of the tao Tei motif to the cultures of Ancient China, and their leathery hides have an iridescent, jade-like quality. Their blood is a dark green in color. There appear to be three main castes of the Tao Tei:

The Tao Tei are ravenous monsters whose sole purpose is to consume anything in their path. They are eusocial creatures like ants, dedicated to serving their queen. They are carnivores, and will devour any source of flesh be it animal or human, dead or living, and even retrieve the corpses of the other slain Tao Tei presumably to scavenge (and possibly to prevent the humans from studying them).

In terms of intelligence, the Queen is the only member of the horde with any kind of advanced thinking capability. She is the only one that is confirmed to be capable of strategic analysis and planning in response to the changing circumstances on the battlefield shown when she presumably instructed her soldiers to move slowly and silently through thick clouds of fog. She is also shown to be ruthless in the execution of these strategies, and is completely willing to throw away the lives of her soldiers to achieve her goals, though she will order a tactical withdrawal if she is losing too many for little to no gain.

The Soldier Tao Tei on the other hand lack sapient level thought, though they do seem to possess enough intelligence to adapt on the spot to carry out the Queens orders; e.g. during the assassination of the Nameless Orders general, the two Tao Tei involved were shown to be biding their time, waiting for the right moment to launch the attack and leaving the bodies of some human soldiers in order to make the generals bodyguards separate from the general, all presumably without instruction on when and how to do so from the Queen. The Soldiers are also incredibly aggressive and fearless, being completely willing to charge headlong through a hailstorm of arrows and catapult shots despite being hit multiple times, and also willing to push themselves further onto spears to attempt to get at the human on the other end.

The Tao Tei are able to run very fast and are moderately strong individually, but often rely on swarm tactics to overwhelm their enemies. Much of the food they devour is regurgitated back to feed the Queen, and large amounts of food allow her to breed more soldiers and expand their colony.

The Tao Tei are pacified by magnetic rocks, as being in the vicinity of one seemingly blocks their connection with the hive mind, causing them to fall still and silent without instruction.

While the Tao Tei are physically sturdy, able to shrug off a hail of arrows, jabs from lances or even being set on fire, a direct hit in the eye kills them instantly. While this is the easiest way to kill them, other methods such as making them swallow explosives or slicing them into pieces also seem effective.

The Queen is the most vital aspect of the colony, as she both serves as the reproductive element of the colony as well as the mental initiator of the hive mind. Killing her causes the whole colony to collapse, with the entire army ceasing all activity and freezing in their tracks.

During 1000 BC in Ancient China a meteor crash-landed onto Gouwu Mountain, which began to glow green. With it came forth the Tao Tei that proceeded to lay waste to China. The appearance of the creatures coincided with the rule of a despotic emperor, making the Chinese believe that the Tao Tei was sent from the gods to punish the emperor of the time for his abuse of authority and to serve as a reminder to the people of the price of unchecked greed. Since then they attacked northern China once every sixty years. The Nameless Order was formed to combat the Tao Tei and the Great Wall was erected to safeguard the land.

During the Song Dynasty, the Tao Tei attempted another invasion into the interior of China, but were once again repelled by the Nameless Order. The Order had been alerted by two captured Western mercenaries, which had killed a Tao Tei scout and tipped off the Order that the siege was nine days early. Emerging in a massive swarm from the mountain, the Tao Tei piled themselves onto the wall by the millions as the soldiers used archers, flaming catapults, and spear-women to keep them at bay. The Queen and her guard were the last to emerge from the mountain, and she was targeted by the catapults but her escorts managed to deflect the fireballs with their frills. Enraged, she commanded her troops to form a ladder from their own bodies to climb up the wall, and at least three managed to reach the top but were quickly killed by the captured mercenaries. With massive casualties mounting, the Queen recalled her troops, and they gathered the dead Tao Tei and retreated.

Later it was discovered that the Tao Tei were pacified and immobilized using magnetic rocks, and there was a plan to use them to destroy the Tao Tei through the Queen. However, it was discovered that the Queen had been laying siege to the Wall as a diversion, while the rest of the army was digging under the Great Wall, circumventing it and the Order and leading her hordes to the capital. A Tao Tei soldier, captured earlier to test the magnet theory, was locked up inside the palace, but after an experiment went wrong and the magnet was taken too far away, it awoke and signaled to the Queen, leading the swarm straight toward the emperor's palace.

The capital was nearly overrun but a small contingent of the Order managed to hold them off with the help of the palace's military. There the Tao Tei had made a new nest in the middle of the capital, and the Order managed to exploit the swarm's unwillingness to attack while the Queen was being fed by sneaking into the sewers. While there, they strapped explosives to the captured Tao Tei soldier and gave it food to bring to the Queen. The Queen's guards were initially reluctant to let the bomb-laden Tao Tei in but ultimately (and foolishly) allowed it to enter.

With the explosives now within the Guards protective ring, the Order's general and one of the mercenaries climbed up a tower and fired an explosive arrow at the bombed soldier, but the Queens guards managed to deflect the arrow, whose explosion alerted the Queen to their presence and caused her to summon her soldiers to attack the tower. A second attempt failed as well, but in the third try, they dropped the magnet in the midst of the guards, stopping them from unfurling their frills and leaving the Queen exposed. The bombed Tao Tei was successfully struck by the arrow and the Queen frantically tried to extinguish the explosives by chewing on them, but this merely triggered the explosion, blowing her and her guards to pieces. With the Queen destroyed, the rest of the army froze in their tracks, dropping dead all over the palace and signaling the end of the Tao Tei for good.

Retrieved from "https://aliens.fandom.com/wiki/Tao_Tei?oldid=202679"
Community content is available under CC-BY-SA unless otherwise noted.