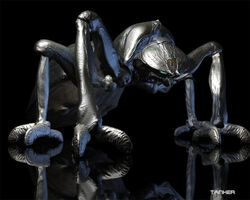 Tanker Bugs are a morphological caste of the Arachnid Empire. Generally black in overall coloring, they are nearly as large as the massive Plasma Bugs, and utilize the dreaded ability to spray a stream of flammable, corrosive liquid from their head section.

Two subspecies of Tanker Bugs are known to exist: The first ones eject fuel from an organic nozzle-spout located on the top of their head, which is ignited by an electrical spark generated by each of its two short antennae on either side of the weapon.

The second subspecies however utilize the same weapon concept in a slightly different design: these alternate tankers instead spew two separate chemicals from two tube-like nozzles on either side of the mouth, where they are mixed along with a small but devastatingly powerful amount of catalytic enzymes. Once mixed these three components will together undergo a violent exothermic chemical reaction to produce the "flamethrower effect" the caste is so well known for.

Both have armor plating along their dorsal side that is believed to be very physically hard and tough to penetrate, although information gleaned from actual attacks involving these species have indicated that explosive weaponry appears to be the easiest way to bring one of these gargantuan monstrosities crashing to the ground.

Why these two subspecies exist is anyone's guess, although it may indicate that the Arachnids test out a few new versions of each new strain, to see which is more effective in battle; this, however, is pure speculation. Another theory is that one version of the caste is in fact the newer version of the other, and the older form is in the process of being phased out in lieu of a stronger or more easily deployed group.