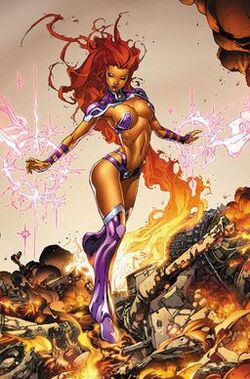 See "powers and abilities" below

DC Multiverse
Tamaraneans are a sapient humanoid species native to the world of Tamaran in the Vega system.

Tamaraneans are externally very similar to Humans, although they are distinguished by golden orange-skin, green eyes, and red hair. Additionally, Tamaraneans are descended from a feline-like race instead of a simian.

As they mature, young Tamaraneans experience a phase of "transformation", in which they may undergo temporary physiological oddities and enter a chrysalis stage.

Tamaraneans have nine stomachs and are known to consume food that most Humans would find unappealing.

The Cironielian Chrysalis Eater is a natural predator of the Tamaraneans during their chrysalis stage.

Tamaraneans are extremely powerful beings capable of amazing things. They mainly use their abilities for combat purposes but can use them for other tasks as well. Many of their powers are fueled by specific emotions.

Tamaraneans can generate bright green-colored (or lilac in the case of Blackfire) energy called "starbolts" from their hands and eyes. Both Starfire and Blackfire gained this ability as a result of experiments performed by the Psions.

Tamaraneans have an accelerated healing factor.

Tamaraneans have the power to convert ultraviolet radiation into energy for self-sustained flight in vacuum and atmosphere without wings, much like Kryptonians. Females in particular produce a distinctive contrail that seems to flow from their hair.

Tamaraneans have nine stomachs and long lizard-like tongues. They are also good at self-sustenance.

Tamaraneans are very durable, as shown by their tolerance to extreme environmental conditions. In short, they are an invulnerable species.

Tamaraneans are experienced hand-to-hand combat and martial arts. They are also proficient in various weaponry such as swords, harpoons, or longbow and arrows.

Tamaraneans have an extended longevity, meaning that they capable of living for hundreds of years and have a slowed aging process.

Some Tamaraneans may be allergic to metallic chromium.

Tamaraneans traditionally worship the goddess X'Hal. They are ruled by their emotions and were renowned as excellent warriors. Tamaraneans believe in the value of friendship. Friendship is honored in the Blorthog festival in which friends exchange gifts. They fear the rekmas, the point at which friends begin drifting apart.

Other races have been known to hold racism towards Tamaraneans, such as the case of the Vernathian Val Yor, who frequently called Starfire "Troq" (meaning he views her and her kind as worthless and inferior), though it is a mystery as to why.

Tamaraneans seem to have the ability to learn new languages instantly by means of "lip contact" (kissing).

Tamaraneans used scientific skills to make Tamaran a tropical paradise where man and nature stood side by side. The Tamareaneans fought a war with the Citadel for a century until princess Komand'r gave up secrets which resulted in a major loss on the part of the Tamareans. After this, King Myand'r agreed to a treaty in which the Citadel would leave the planet alone, but Tamaran would give up their warrior culture in favor of a more agricultural living. As well, Princess Koriand'r was given up for slavery to the Citadel. The Citadel was defeated by the Omega Men and Tamaran was plunged into civil war. This was ultimately resolved with Komand'r being given command of the planet.