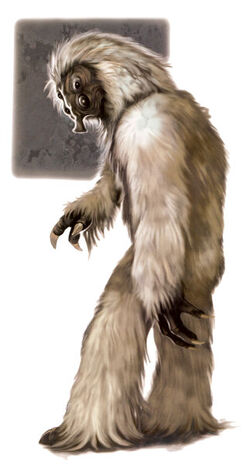 Star Wars
The Talz are a sapient species native to the frozen and mineral-rich planet of Alzoc III, located in a galaxy far, far away. They are easily distinguished by their large frames, dense fur coats and four eyes. Talz are a primitive species, and as such are very rarely seen away from their homeworld.

Talz are 2 to 2.5 meters tall humanoids whose body is covered in thick, white fur that provides insulation and camouflage against the frozen plains of their homeworld. They have sharp claws on their hands for defense. In spite of their large size and their claws, they are mostly gentle and good-hearted beings.

Their mouth is a short proboscis, perhaps indicating that Talz are liquivores. They have two pairs of eyes. The upper eyes are small and are mainly used during the day, when the icy ground reflects the sunlight and the planet is covered in a stunning brightness. During the night, the lower set of eyes, which are much larger and are kept shut during the day, are used to see in darkness.

Talz are strong and hardworking. They are a relatively primitive race and their technology is simple. Despite this, some Talz can be found living on other planets, and they even have a colony on the distant world of Orto Plutonia. This might indicate that one or more Talz tribes have evolved into a spacefaring civilization at some point. It is more likely that these Talz have left their homeworld with the help of a more advanced alien race, though.

In their society they have no concept of ownership. This sometimes leads to other species accusing them of being thieves.

The Talz language, Talzzi, mainly consists of whirrs, buzzes and chirps. Due to their unusual mouths, most of them are unable to speak any other language.

The earliest recorded sightings of Talz dated back to the time of the Old Sith Wars. They indicate that at least some Talz had left their homeworld by 3993 BBY.

By 3963 BBY, a pink Talz was seen operating as a Shadow of Lucien Draay.

Despite their lack of hyperdrive technology, the Talz had established a colony on Orto Plutonia by the time of the Clone Wars.

At some point prior to the Battle of Coruscant, a Talz named Foul Moudama became a member of the Jedi Order. He lost his life protecting Supreme Chancellor Palpatine during that battle. Obi-Wan Kenobi already had knowledge of the Talz species, including their name, when he came across their colony on Orto Plutonia. After a very brief war with the Pantorans, the Talz of Orto Plutonia were once again left alone, being recognized as rightful rulers of that planet.

Imperial scouts found the Talz around 15 BBY as Emperor Palpatine's New Order was finishing off what remained of the Galactic Republic. The Empire recognized a species well built for manual labor and enslaved the Talz of Alzoc III, forcing them to work in the Empire's mining operations. The Imperial authorities decided to leave these events out of official records since it was easier for them to enslave a species that was not generally known to exist. As a result, very few Talz were seen outside of the Alzoc System. Those that were found offworld were considered escaped slaves, with a 5000 credit Imperial bounty payable for their recapture or termination. 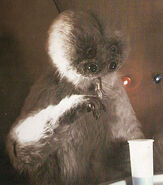 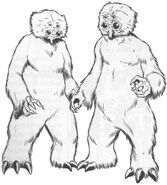 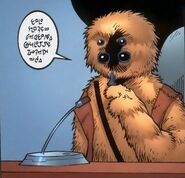