Back to page
Add topic
This article has been formerly nominated to Quality Article status, a honor conceded only to the best articles of this wiki.

Reference should be made to the Alien section in the Colonial Marines Technical Manual. From there, the editor for this article should be able to extract some information on the xenomorph's biology. - 60.48.217.65 16:54, 8 March 2009 (UTC)

Other sources claim they're Silicon based, which may explain why they can be turned into xenoborgs no problem, they already have the basic silicates to sustain computers and the like. 12 July 2019

One thing that seems to be a problem is the use of the term caste in reference to variants caused by differences in the host species. For instance, a Predalien has existed in the expanded cannon as a drone, warrior, and queen. In such a case, predalien refers to a variant xenomorph based upon the host. The Castes themselves are drone, warrior, and queen. I propose that the current "castes" (as of 28 january 2010) be divided into castes and variants. Malys88 00:07, January 29, 2010 (UTC)

Here is the Article

http://metroid.wikia.com/wiki/Alien_Series (Metroid101 02:31, jary 1 2011 (UTC)) I do am good love them i am willing to served them as long as they don't kill people any more then i will obay their comman. Xenomorph i have somthing to tell you i will served you if do not hart me or anything alse i will be glad to help you. the that need help give xenomorph this paper please let me know what he says.

In the the end of Alien vs Predator 2010, its said they have a homeworld, has that been in the page yet? -General Q-Nek hey, its me again xenomoph i will served you if you will not harm me or anyone alse out thier then iam yours for the taking but if your not alien or the xenomoph that you are then who are you. please show me a picutre of if only are alien or a xenomoph. thank you sign andrew T.

I have not seen anything on this page regarding the homeworld. In the first Aliens omnibus published by DarkHorse, a human operation was sent out to what was believed to be the Xenomorphs' homeworld, however, based upon another one of the stories in the omnibus, that may have been the homeworld in the context of it being their queen mother/ empress's homeworld. Who said it in the game and what evidence was provided for it in the game? Malys88 13:41, April 7, 2010 (UTC)

In the ending of AVP 2010, All xenomorphs are reffered to as female, In the predator campaign, when faceing the Praetorian, the advisor says "She is stronger than her sisters", It is also seen that in the end cinimatic, that specimen 6 could not have been with a mate, as she was taken on her own, but molts into a queen for reproduction, This can mean two things:

I am of the opinion that the Xenomorph species does not fall under normal categories of reproduction. There is no evidence of any sexual dimorphism in any of the works of fiction, and the only variants that referred to in the masculine form are experimental variants created by human scientists. However, the feminine form is used to describe non-reproductive castes in ants, so that might be a convention used by the scientists in the series in reference to the drones/warriors. The logic behind the naming of the queen is straightforward, as it is the unique individual in a hive which is solely responsible for reproducing. In as so far as the issue of mating is concerned, it seems that the xenomorphs clearly need hosts of other species and do not procreate among themselves, therefore it follows to reasont that the xenomorphs acguire some of the DNA of their hosts to maintain genetic diversity. One might consider the xenomorphs as "xenosexual".Malys88 23:13, April 17, 2010 (UTC)

While I consider them a sexual being - you have forgot a type of reproduction: parthenogenesis (they could also be born pregnant, like Tribbles). But do not forget that they were presumably created by the Space Jockeys and are described as biomechanical in nature - there could be a mechanical procedure in them that allows asexual reproduction (as I believe they meant 'biomechanical' as a sort of alternate phrasing for 'natural cyborg'). If it were not for the Kenner Toys which I grew up on, and knowing how inhuman the Xenomorphs are, I would assume some form of asexual or nonsexual reproductive formation. -- Somarinoa 22:45, June 20, 2011 (UTC)

Lol, 2010. Talking to a brick wall here Somar. :P Anyway, don't know if you know already, but I've nominated Holbenilord for ensign rights. Much appreciated for him if you would vote and/or give comment. Insurgence: Like the Phoenix I rise again! 23:04, June 20, 2011 (UTC)

I feel like it's better to refer to them as being able to switch their gender similar to a clownfish, instead of saying that they are all female, as Big Chap from the first movie has usually been referred to as male. 73.10.155.171 04:08, April 28, 2020 (UTC) Anonymous 00:07, April 28, 2020 (EST) ▪ I disagree, it by reference is more logical, and by reference Specimen 6 referred to as 'she' as well as it confirmed the whole molting process/parthanogenesis deal

in several alien comics, it is shown that leprosy will prevent a chestburster from emerging! should this info be included here? ralok 20:34, May 4, 2012 (UTC)

Do they ever impale victims with their tails in the Alien series? I'm not sure coz I haven't seen those movies in a while but I only seem to remember them doing it in Alien vs. Predator, which is part of the Predator series. I also checked deathlists and all on-screen kills seem to be either tongue or chestburster. Is the tail stab exclusive to AVP and AVPR or do they do it in the Alien movies too? If the former, I think that should be noted but again I'm not 100% sure. Ghostkaiba297 (talk) 03:06, February 12, 2015 (UTC)

The Queen does it in "Aliens". Because of the greatness her majesty possesses the tail has enough momentum to penetrate a human body easily. That special technique is probably used by her drones too but it wasn't shown in the movies. I also cannot remember seeing the blade at the tip of the tails in Alien 1-3.

"Alien: Isolations" Xenomorph howsoever makes use of its tail quite frequently. It is maybe a new feature ported over to the old concept but it makes sense. The tail has a job to do instead of just "hanging around". It works well together with the whole xenomorph concept and is a change that doesn't disgust the purist in me. 185.102.241.201 17:38, August 20, 2016 (UTC)

I think they should make a movie about the Deacon

Let's be blunt. Prometheus and Covenant are not canon and only exist for the self-insert that is David. If you wanted to make a fucking terminator movie, go make a fucking terminator movie. If you want to argue that it IS canon, then do not exclude the only link that makes it so (that was removed from the final film): The Mala'Kak were trying to revive the (at-the-time-extinct) xenos (aka "Starbeasts"), which they viewed as gods, since their own species became infertile.

AVP is arguably more fitting for canon as it's more built up and thought out, versus the haphazard and frankly embarrasing cash-in that was Methamphetamine and Cuckanant. Furthermore, it needs to just be stated the following:

Xenoborgs. They take to the tech like nothing. Graft any bit of technology onto a xeno and it somehow immidiately knows how to use it like a second skin and they always posessed it. How does that even work?

It is also stated that they are "semi-sapient", but it's also just as plausible that they're fully sapient. They just don't care for anything that isn't immidiately murdering everything or spreading their own brood, hence never bothered with anything past that.

Furthermore, it should be pointed out their Extremophile qualities; such as being able to survive direct exposure to Space indefinitely.

Yeah, I'm not too enthused either, but we can't control what direction the corporate overlords choose to point the series into going. The whole meta-franchise is owned by Disney now so we're absolutely never going to get another Alien film where the subtext is still the same as it was originally intended to be so the chance of true horror is probably gone from the series. I was pretty sure at least the Queen was sapient, especially if we take media like the 2010 AVP game into consideration. Semi-sapient should refer to organisms that are super intelligent but just below a sapient threshold, like dolphins, chimpanzees (which are officially in the stone age now), et cetera. — Somarinoa (talk) 15:30, August 22, 2020 (UTC)

It could've been better, but we know that the xenovirus (chemical xxxx) is where xenomorphs come from, so they're still alien even if they come from a shapeshifting organism of unknown origin instead of a specific planet. I always saw it as David opening Pandora's Box as opposed to creating something, in his arrogance he credits himself with the creation of the xenomorph, when it was inevitable anyway because why else would the Engineers want to wipe out humanity? Also, the Protomorph from Covenant could regenerate or "DNA" itself back together from being crushed by a claw likely built to withstand the crushing atmosphere of gas giants, I don't recall average xenomorphs being that resilient. Likely the xenovirus further mutates the Neomorph mote sacks into a less evolved form of egg and facehuggers, as the facehuggers in the original series had eight legs, not ten like David's xenomorph/Protomorph. Also I'd say for the main page that height and weight is too low, the original "Alien" was over eight feet tall and its head alone dwarfed human cranium: 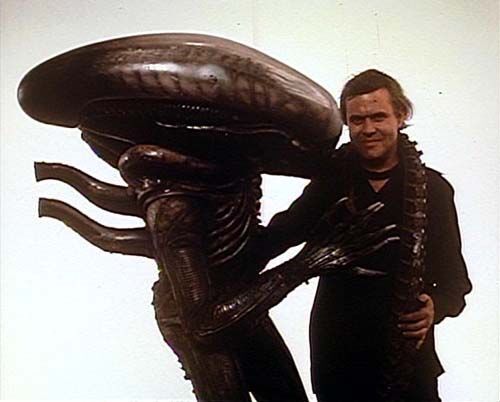 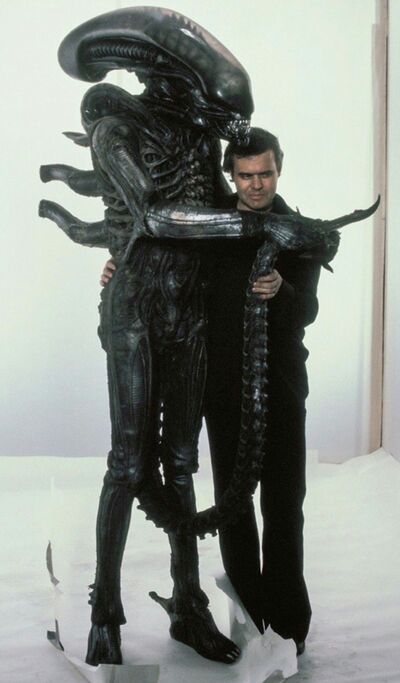 That is an unfathomably massive creature, being you could fit about eight to ten human heads (5 kg/11 lb) inside of a hollowed out xenomorph skull, so its head alone could weigh as much as 100 pounds, and each of its tubes probably weighs as much as an arm, or about 5.7 kg, so that's another 50 lb. Robert Wadlow, at 8'11 and almost 500 pounds, was even taller and lankier than the original Alien's xenomorph: 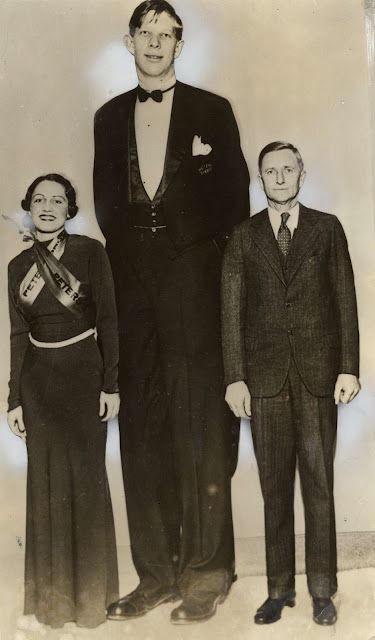 Reproductive Anatomy (revival of the subject)[]

So I'm guessing the tube the animal uses to lay eggs is probably some kind of stinger? Or is it like how the Namekians from Dragon Ball would asexually reproduce? If that's the case, what kind of organisms are they exactly? I can't remember if the movie explains it or not.