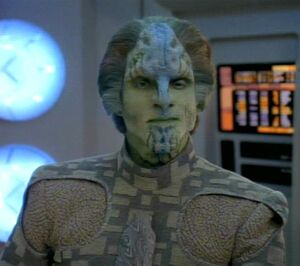 Star Trek
Takarans are a sapient, spacefaring humanoid race which hails from planet Takara. Their skin color is green with blueish patterns on their faces.

The Takaran internal anatomy is amazingly different from that of most other intelligent species: their internal organs are less specialized and more evenly distributed inside the bodies, rendering them extremely resistant to physical injuries.

Additionally, Takarans are also able to voluntarily control cellular activity, which can be done in a specific part of the body that has been harmed, in order to slow down the injury; or in the whole body, allowing them to consciously simulate death. This "possum playing" is convincing enough to trick even experienced doctors, although those already familiar with this Takaran ability may be able to tell whether a Takaran is truly dead or not by checking the rate of cellular decay in their bodies.

They appear to be a deceiving and bellicose species, judging by the behaviour of Dr. Jo'Bril.

Retrieved from "https://aliens.fandom.com/wiki/Takaran?oldid=198399"
Community content is available under CC-BY-SA unless otherwise noted.