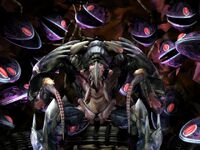 Another insectoid race, similar to the Klackons. Tachidi is physically the largest race in Orion Sector and thus far stronger than Klackons. Their biggest different, however, is that Tachidi have overcome the limitations of the Hive Mind. They remain industrious and productive but now view the universe with insatiable curiosity. It is the curiosity of a child, one that does not know that you can hurt the puppy if you pet it too hard. They are also the race with highest population growth.

Retrieved from "https://aliens.fandom.com/wiki/Tachidi?oldid=125317"
Community content is available under CC-BY-SA unless otherwise noted.