"That’s it? That’s a TARDIS? The pinnacle of time technology reduced to a wooden shack with a lamp on top?"
―Hellenica Monroe, The Crystal Bucephalus 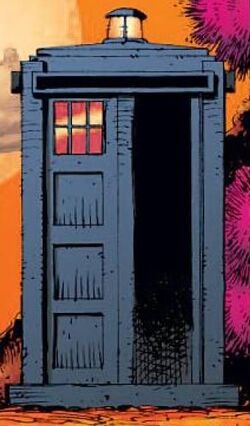 Doctor Who
TARDIS; which stands for Time and Relative Dimension in Space; is a designation coined by Susan Foreman to refer to living, intelligent, spacetime-traveling biomechanical ships, the type of which is employed by the Time Lords of planet Gallifrey to travel through time and space and traverse the time vortex. They're dimensionally transcendental and can change their physical appearance to pass off as a commonplace object.

Originally, the TARDIS designation might have applied specifically to the Doctor's vessel, but it seems to have spread out to the point of becoming the most popular name for the whole diverse class of living Gallifreyan timeships. Several different types exist, with the Doctor's TARDIS being a Type 40: generally regarded as a very outdated model by other Time Lords.

TARDISes are well known for being dimensionally transcendental, i.e. much bigger on the inside than the outside; and may in fact house their own miniature pocket universes containing numerous rooms, corridors and machinery. The Doctor's TARDIS contains a library, a zoo and a swimming pool, among other things.

The chameleon circuit allows a functioning TARDIS to rapidly scan its surroundings before it materializes into a specific time and location, and assume an illusory form that draws no attention to itself. It's also possible for the Time Lord to choose the shape his or her TARDIS will take. A fault in the chameleon circuit may cause a TARDIS to become "stuck", however, just like the Doctor's TARDIS ended up permanently stuck in the shape of a 20th century British police box.

In spite of its enormous mass (once estimated as 5 million kilos "in [Alzarius'] gravity"), a TARDIS can alter its weight to match what would be expected of the object it is disguised as; and thus can be lifted and carried away by groups of humanoids. It is, however, far more durable than what it appears to be, as the Doctor's TARDIS has remained intact after falling off a mountain, and even the army of Genghis Khan wasn't able to break into it.

The TARDIS' translation circuits allow its non-Time Lord occupants to speak and comprehend most alien languages: a process that requires mediation by the TARDIS' resident Time Lord (as Time Lords already are natural polyglots thanks to their psychic abilities). Being living creatures, the relationship between a TARDIS and its Time Lord pilot is symbiotic, and a TARDIS may even assist in the Time Lord's regeneration process.

Despite the chameleon circuit suggesting that an element of stealth would be integral to the design of a TARDIS, these ships make a very distinctive whirring sound when they materialize and dematerialize. Contrary to some belief, this sound is not exclusive to the Doctor's TARDIS, although it might possibly be a characteristic of earlier models. It is possible to materialize a TARDIS silently, however.

Retrieved from "https://aliens.fandom.com/wiki/TARDIS?oldid=199073"
Community content is available under CC-BY-SA unless otherwise noted.