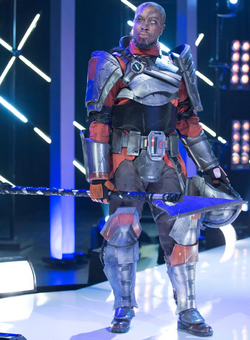 Cosplay Melee (Based on Star Wars)

Xavier Conley
Syresh Vöōs is a Star Wars inspired character created, designed and played by Xavier Conley for the TV show Cosplay Melee. Xavier won both rounds and the 10,000 dollar prize for the character.

Born on Coruscant, Syresh eventually left for the Outer Rim where he became a low level crime lord. Various conflicts over the years have left him with numerous scars as well as a cybernetic eye. Equipped with a vibro spear and a jet pack, he is considered one of the best melee combatants in the galaxy.

Retrieved from "https://aliens.fandom.com/wiki/Syresh_V%C3%B6%C5%8Ds?oldid=164652"
Community content is available under CC-BY-SA unless otherwise noted.