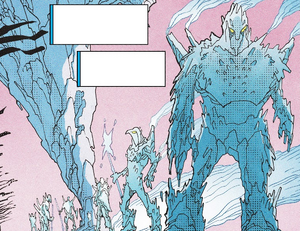 Marvel
The Syneca are an crystal-like alien race from the Milky Way Galaxy.

The Syneca were crystalline beings with beaked heads.

Ages ago the Syneca visited the planet Centauri-IV with the intent to convince the primitive Centaurians to use their technology and integrate with the rest of the star system. The Syneca were generous and all they wanted in return was a little bit of yaka ore. The Centaurians in awe at their technology which seemed like magic were in the process of negotiating trade. However a young Centaurian hot-blooded youth named Yondu, along with his tag-along friend Babatuku commandeered a Syneca ship, crashing it into one of their temple dedicated to Anthos and killing an elder. The Syneca and Udonta Tribe elders demanded justice. Yondu tried to hide his part in the crime, but Babatuku revealed it was he who piloted the ship. Yondu was cast out and disowned by the race, as his stunt costed them a prosperous deal with the Syneca who left Centauri-IV never to return. Yondu now no longer seen as a Centaurian stowed away on their vessel which was later raided by pirates who accepted Yondu among their ranks beginning his life as a pirate.

The Syneca were a space-faring culture possessing vessels made of crystal, advance communicators etc. They were known to be a generous race.

Retrieved from "https://aliens.fandom.com/wiki/Syneca?oldid=184753"
Community content is available under CC-BY-SA unless otherwise noted.