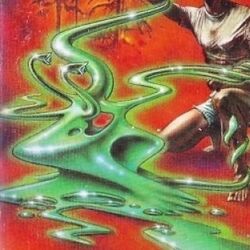 Hal Clement
Symbiotes are a sapient amorphous species resembling a green gelatinous mass. They are made up of biological units much smaller than cells, more closely resembling viruses; and like a virus they live within the bodies of larger lifeforms, although they are able to survive outside of a host, at least for some period of time.

Unlike most symbionts and parasites; these Symbiotes are highly generalist; able to survive inside many species of lifeforms native to different planets of the galaxy. Once entering a host, they can easily dodge around their natural defense system until they are capable of producing substances that cause the host's body to "accept" them. They can feed on practically anything organic, and would horribly kill the host if they acted on instinct alone. It is rather their intelligence and moral code that allows them to act symbiotically, and not parasitically.

They are sensitive to ultraviolet rays, heat and alcohol, because they have no true skin for protection from the dehydrating action of the alcohol.

Alcohol feels to them as concentrated sulfuric acid feels to a Human being: their outer cells are killed almost instantly, desiccated to a brownish powder.

For a number of spacefaring species, hosting Symbiotes is socially normal. They associate with a lifelong host with which they share a friendly relationship.

Symbiotes take their share of nutrients and oxygen without causing damage to the host, and act like an efficient medical system capable of healing or alleviating many sorts of physical damages and diseases.

They are able to stop bleeding from injuries, and dispose of infecting microorganisms and other hazardous agents, and within limits even minimize pain.

Like practically all species, however, criminals exist in their society, being particularly dangerous for their ability to live within a host for decades undetected.

Symbiotes can communicate with their host through a number of ways. Usually they will decide upon joining which way is more comfortable to their host.

When in direct contact with each other, Symbiotes can communicate using a complex chemical language, described as capable of higher levels of significance and nuance than most verbal idioms.