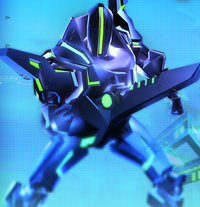 Metroid
Sylux is a bounty hunter of an unknown species of sapient extraterrestrial.

Sylux too received the Alimbic message, stating that the key to ultimate power lied in the Alimbic Cluster. Sylux wants this power, for "it just might be powerful enough to destroy the entire Galactic Federation..."

Sylux's weapon of choice is the Shock Coil, a weapon that resembles a sword (when he uses it, anyway) and fires homing bursts of electricity. His alt-form, the Lockjaw, is a collection of energy surrounded by two beams that resemble his suit. Sylux's alt-form weapon, the Electric Bombs, can be dropped in groups of three. The bombs will create an electric tripwire between them, and all the bombs will explode if someone crosses the line.