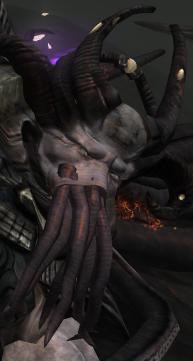 About the size of a watertower.

Hellgate London Universe
Sydonai is an Elder Demon, one of the rulers of the demonic hordes who have invaded earth. He may even be the first demon mentioned in The Origin of Evil.

The Origin of Evil[]

"A storm of supernatural horrors driven by the lashes of Dark Wills who have devoured countless civilizations, Demons are as old as time itself.

Born as a direct consequence of the Creator blessing the absolute nothingness of space with ever-expanding life, Demons are the antithesis of life. They are coalesced evil -- manifestations of hate, fear and unknown sins that thrive on mortal impurity.

Though most in the Shadow's thrall exist as nameless beasts and ethereal nightmares, the Dark Wills are those that have consumed countless billions and have endured the unceasing expansion of the cosmos -- that sickening spread of life they so abhor. Those select few have attained identity and rank through conquest (mortality has given name to the nameless). And these beings of absolute malevolence now govern the seemingly senseless slaughter and rape of worlds. They command the ever-starving Darkness that ravages without conscience. In turn, they and their legions vast are endowed with the power of newly corrupted civilizations. Their Burn purges whole worlds of life and supplies their unnatural birthplace of fire and decay with nourishment that propels the Shadow forward to ravage again and again.

Above them sit The Eldest, demons of even greater renown and power. And above all sits The First, the icy heart of all Evil everywhere. The First is consumed by a desire to undo that which The Creator has done. He is the opposite of all that is good. He is death to life, hate to love, horror to joy. He is the end of all beginnings. He is the hint at something far worse. The Dark Wills are but puppets to The First. The Eldest are but hints of his terror."