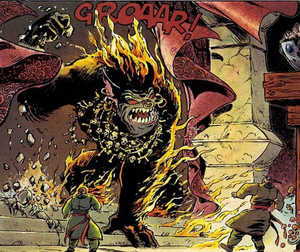 Swoog is the God of Trolls from the land of Darshan.

Swoog takes the form of a giant en-flamed Troll, wearing necklaces made of human bones and skulls.

Two hundred years ago Nymethny was manipulating his trolls via the Tronlzes, who were supposedly Servants of Swoog. Tetram and his family summoned him with the help of Toro the Troll and he did battle with the upstart god killing him.

Swoog like many gods in Darshan became wary of the appearance of Lanfeust due to his abilities rivaling a god. While many of the gods wanted to Lanfeust to have a dialogue with the human, Swoog sought to kill him in fear of his god-power.

He sent his trolls to delay Lanfeust and his allies from reaching the Palace of the Gods, however all his attempts failed. He was present at Zeugme where many of the major gods observed Xhiatyr speak with the young hero. During the meeting to inspire fear amongst those around him, he ate a human attendant. Despite Lanfeust stating he wished only to defeat Thanos (Lanfeust of Troy) to prevent him from claiming the Magohamoth, the rest of the gods ultimately saw Thanos more of a danger, Swoog continued to be antagonistic towards Lanfeust.

Swoog did not openly defy Xhiatyr's orders, however after the heroes were guided to the City of Ice by Sphax, Swoog chased after them with the help of Zkrkrxs. While the gods could not be killed, Lanfeust used his powers to imprison them in ice.

Swoog commands the White Darshanide Trolls, human worshipers usually pray to him in order to pacify them.

Retrieved from "https://aliens.fandom.com/wiki/Swoog?oldid=175628"
Community content is available under CC-BY-SA unless otherwise noted.