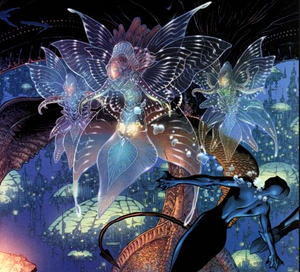 The Swimmers are a subspecies of aquatic Lesser Races from the world of Avalon.

The Swimmers were a genetically engineered species modeled after various sea life by their creators. In addition they possessed telepathic abilities allowing them to communicate with other races and creatures and possibly hydrokinetic abilities.

The Swimmers are descendants of slaves that escaped from their creators centuries ago. Over time the slaves joined together to create a Haven an underwater city beneath the seas of Avalon, between the lands of the Heron Dynasty and the Raven Dynasty.

Their existence was known by Prince Ethan of the Heron Dynasty after several scouts of the Swimmers rescued him and his servant Skink from drowning. Years later he along with Princess Ashleigh visited the Swimmers to appeal them for a boon. The duo asked the Swimmers to provide a haven for the Lesser Races that still sough freedom in the Raven Dynasty.

Though the Ruling Council of Haven were moved by the noble efforts of the humans they declined due to the massive amounts of resources needed to support a new city and could possibly endanger Haven.

The Swimmers are a highly advanced culture if not the most on Avalon. They were isolationist but a sympathetic people.

Retrieved from "https://aliens.fandom.com/wiki/Swimmer_(Scion)?oldid=168844"
Community content is available under CC-BY-SA unless otherwise noted.