Alien Species
Register
Don't have an account?
Sign In
Advertisement
in: Extinct Species, Descendants of Man, All Tomorrows Universe,
and 7 more 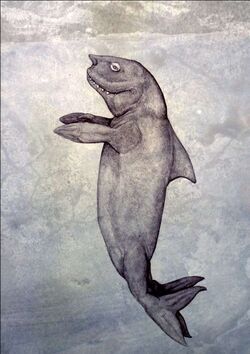 Created by the Qu from colonies of the Star People

Extinct; one species evolved into the Tool Breeders

Nemo Ramjet
The Swimmers were many of the posthuman species created by the Qu from a colony of the Star People. They were all domesticated and had to be taken care by special attendants.

The only species of swimmers that survived were a few forms that were only slightly mutated and resembled their human ancestors to some degree. They had no artificial gills, hand-like flippers, and their hindflippers were still paired like the legs of their ancestors. Even though they didn't understand each other in any sapient way, they spoke to each other.

Over thousands of years, they evolved more streamlined forms and became better and better hunters of fish. It took them a really long time to found a civilization once again, but eventually they managed to domesticate some aquatic organisms and became the Tool Breeders.