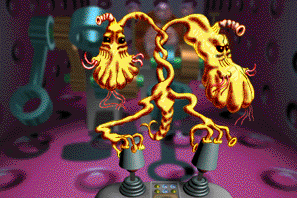 The Swaparamans evolved on the first planet of a binary star-system (consisting of a normal star and the black hole Graveesha in orbit around each other). The dual-star configuration (it is assumed) influenced the development of duality-inverse-reality structures that continually build in the minds of Swaparamans like electricity charging a capacitor. Once charged, the Swaparamans can release their stored potential.

The Swaparamans evolved on the same world as the Frutmaka, and they share common ancestry. Milennia ago, The Frutmaka betrayed the Swaparamans and drove them from their home world.

A tiny number of Swaparamans - the ancestors of all modern Swaparamans - were able to flee their home world in space vessels that they patched together in secret. The architect of this bold escape was Tanandanam, a wise and determined leader whose name is now sacred to Swaparamans.

The Swaparamans have thrived on their new planetary home since their incredible escape but have lost the knowledge of space travel. Swaparamans remember their history and they are filled with the worry that their existence on a single planet is too precarious.
You are the latest of the successors to Tanandanam. You must follow the example Tanandanam set and secure the future of your people.

Energy Doublers: The Swaparamans produce extra power. You can double the power of all your ships.

Retrieved from "https://aliens.fandom.com/wiki/Swaparaman?oldid=160987"
Community content is available under CC-BY-SA unless otherwise noted.