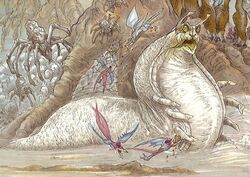 Swamp Slugs can grow to 8 meters in length. They are among the most fearsome predators on the planet. They are opportunistic omnivores, though, eating not only faunal, but also floral organisms. They swallow anything they can, and use the thousands of teeth in their throat to crush the food.

Swamp Slugs have 24 pairs of short legs, and large yellow eyes that are able to see clearly beneath the dark swampy waters. They also have short antennae used for echolocation.

Swamp Slugs are hermaphrodites. Apparently, they can reproduce both sexually, with both partners laying hundreds of eggs; and asexually, giving birth to a single offspring.

It is stated that Swamp Slugs are closely related to the Nos Monsters of planet Utapau. It is unknown whether the common ancestor of the two beasts lived on Dagobah or Utapau, but the idea of two closely related organisms inhabiting different planets seems to support the theory of panspermia. It's possible that all life on Dagobah is somehow related to all life on Utapau through an ancient common ancestor that moved from one world to another at some point. It must be kept in mind that this is just speculation, though.