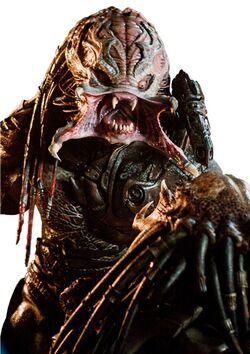 A Super Predator unmasked in a duel with an ordinary Predator.

Predator
The Super Predators are a type of Yautja race, although they could just be enhanced or superlative individuals of the species.

They are physically larger standing at roughly 7' 4" tall (~ 2.2 meters), being stronger, more muscular than their clade and of a more slender build. They have a more reptilian appearance than their better-known cousins, and have scaly skin in addition to different coloring. Another feature is that their dreadlocks are far more swept back than on normal Yautja. They also posses a longer face, giving them a small snout in effect.

Three Super Predators appear to be in a blood feud with the smaller Yautja. They use the similiar technology; appearently; slightly more advanced compared to their common brethern.

They do differ in various ways in terms of culture; the first difference is that they only have a single blade on their gauntlets, they also use a gatling-gun type of plasma caster and a modified cloak. They wear tighter armour, with less metal and more leather.

When hunting they use traps, preferring to induce fear and panic into their prey in an attempt to make them run. Another feature is they (unlike their cousins) have no qualms about killing an unarmed, injured or crippled enemy (though they will still honorably fight one on one in single combat with their foe). Super Predators have also been seen to use some kind of hunting dog for "flushing out" their prey.

They appear to value trophies and large numbers of kills, rather than honor in the hunt or in the individual kill. Thus, Super Predators value the hunting more for sating their obvious bloodlust rather than tradition. 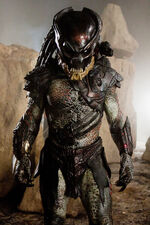 The Berserker Predator is the ultimate hunter. Born with superior physical abilities and intelligence, he was the youngest Yautja to ever kill a Xenomorph and reach Young Blood status. Considered a prodigy among his clan, he quickly rose to almost legendary Warrior status; achieving more kills than any Predator of his generation. As a Predator of the Honored class, Berserker Predator became a leader of his own hunting clan consisting of only himself and two Young Blood Predators: Tracker Predator and Falconer Predator. He was, however, eventually killed by decapitation in 2010 by Royce: a human mercenary who had been dropped off on the game preserve planet for the annual hunting season. 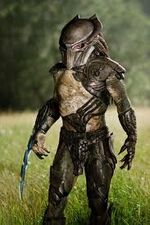 Highly skilled in engineering, Falconer Predator isn't interested in following the old Yautja traditions of the hunt. To him, the hunt must evolve, along with its tools. In his eyes, the best way to do so is to observe and acquire the techniques and technology of those he hunts. As a newly successful Young Blood class Predator, Falconer Predator became intrigued by his prey that used flying creatures as a hunting tool. Not satisfied to domesticate and train such creatures on his home planet, Falconer Predator built and programmed his own deadly bird using the technology of the Yautja augmented by the technology of Xenomorphs and other cultures he had encountered in his hunts. He seems to be the only Super Predator who has honor to a degree; as he doesn't simply kill his enemy but chose to stand and fight honorably to the death. 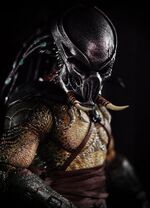 The Tracker Predator always enjoyed the company of Hell-hounds more than that of other Predators. He bred and trained the hounds because he believed they were not being used to the full extent by other Yautja. On his first official hunt of a Xenomorph, the hounds allowed him to track and kill a Xenomorph in record time, but there wasn't much of a trophy to collect as the dogs didn't leave a shred of the prey intact.

It is unknown if this gigantic four-armed mutant\mutated Yautja[1] is actually a Super Predator. The creature rages easily and delivers melee attacks stronger than any Predator so far, however Royce still managed to defeat this massive Yautja, even when he was near death.