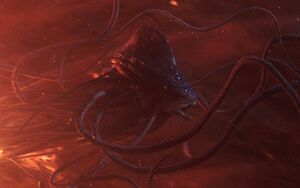 The Summa-verminoth is a monstrous space-faring life form which is known to inhabit the Akkadese Maelstrom: an agglomerate of electrically-charged gas, planet-sized carbonbergs and other debris located in the Kessel Sector of the galaxy.

Large enough to dwarf spaceships such as the Millennium Falcon, the Summa-verminoth is a cephalopod-like beast with a multitude of extremely long grasping tentacles and a face consisting of dozens of glowing blue eyes as well as a sharp-toothed maw.

Retrieved from "https://aliens.fandom.com/wiki/Summa-verminoth?oldid=181009"
Community content is available under CC-BY-SA unless otherwise noted.