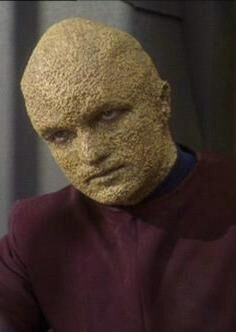 Star Trek
The Suliban were a nomadic humanoid species from Sector 3641 whose homeworld became uninhabitable in the 1850s. They are easily recognized by their skin texture, which resembles osage-orange.

Many Suliban settled in the Tandar sector, but when the Suliban Cabal began warring on the Tandarans in 2144, they were rounded up and placed in detainment camps.

Suliban were no more evolved than Humans, and normally possessed three bronchial lobes. Vulcan evaluation concluded they were nonthreatening. Doctor Phlox examined a pair of Suliban, a husband and wife, a few years before his assignment to Enterprise NX-01. He considered them very cordial.

Their first contact with Humanity came in April of 2151, when two Suliban pursued Klaang the Klingon to Earth. Though these Suliban perished, several more boarded the starship Enterprise while it was transporting Klaang to Qo'noS and succeeded in kidnapping him. One of the Suliban was killed by Enterprise security forces, and examination revealed it had been genetically enhanced. Further investigation showed this Suliban belonged to the Suliban Cabal, which was working for a benefactor from the future in exchange for these enhancements.

The Suliban existed in the mirror universe, as well. The ISS Enterprise had acquired a Suliban cloaking device by January of 2155.

The name "Suliban" was coined by Rick Berman, after the Taliban, months before the September 11, 2001 attacks. According to Berman, the "Taliban was just a mysterious, exotic name to me. Several years ago, I went to Afghanistan. I used to make documentary films and traveled around the world, and the Taliban regime was just getting a stronghold there. To me, there was something incredibly dramatic about the name Taliban it was like something out of a Sinbad story."

The Suliban seemed to have settled down by the 23rd and 24th centuries as we've never heard of them or seen them. Early in the series' development, the creators hinted that the audience would learn the fate of the Suliban species (and why they never appeared outside the prequel series), but that too must have been changed when the Temporal Cold War arc was prematurely ended in Enterprise's fourth season.

A sheet with Suliban script remained in Hoshi Sato's quarters aboard Enterprise. The sheet was part of a bulletin board which was sold off on the It's A Wrap! sale and auction on eBay. A Suliban interrogation device, seen in "Broken Bow" and "Shockwave, Part II", a Suliban wall panel and a special effects make-up head wrap lot were also sold off.