Alien Species
Register
Don't have an account?
Sign In
Advertisement
in: Created Species, All Tomorrows Universe, Bipedal Species,
and 9 more 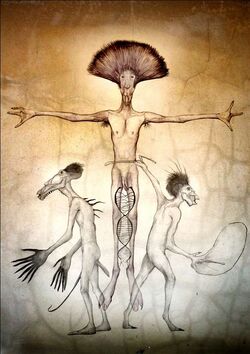 Created from the Bug Facers by the Gravital

Extinct by the time of the Author

Nemo Ramjet
The Subjects were diversified group of posthuman species that was created from the Bug Facers by the Gravital and the only biological species in the Gravital's empire.

Not really realising that biological lifeforms are really life, the Gravital wiped out nearly all biological species. However, one of the first worlds they conquered was the world of the Bug Facers, and for unknown reasons, they didn't fully wipe them out, and instead used genetic engineering to remake them as they pleased.

To the Gravitals, genetically altering lifeforms was no more morally questionable than recycling trash or rebuilding a computer, and so the Subjects were made into several types and variants. Some variants were labourers, some were servants and several were even objects of utility, like cell cultures for gas exchange and water filtering.

There were several extreme subspecies and variants that only used for entertainment and/or as works of live art, like the creature on the right at the info box picture, designed to play its modified fingers like a set of drums while ululating the tunes of a certain pop song. Some variants also had religious reasons; such as the entity on the left at the infobox picture; these subspecies were solely bred for zealous sacrifices.

There were some fractions in the Gravital empire which developed, through science, philosophy and religion, an understanding of universality of life and the common origin of organic and mechanical humanities. Initially, they lived in seclusion and created Subjects that were allowed to do as the please, and eventually the movement gained enough momentum that it could be practised openly without being punished. Some Gravitals even fell in love with their subjects.

The seething intolerance between the two factions finally broke when some Tolerant Machines wanted to set several worlds aside for the unrestricted development of biological life. All hell broke loose and the Machine Empire; the apparently seamless monolith of the galaxy, experienced its first short, bitter civil war.

As the new empire was spanning the whole of the milky way, the humans tried to make contact with the indigenous folk of the surrounding nebulae, while still being cautious because of their history with alien invasions, remembering the Qu and maybe the invaders that attacked the Bug Facers.

After a time, they found another civilisation in the form of a diverse empire ruled by the Amphicephali. Like the posthumans, the Amphicephali had a rich and diverse history and were cautious, but both species finally proved to be mature enough to make contact peacefully. They were the first species to peacefully make contact with humanity, but not the last.

Together, the united galaxies eventually destroyed the Qu, cradled their suns with artificial shells, crisscrossed interstellar space with wormholes and made travel a thing of the past.

By the time of the All Tomorrows afterword, all of humanity has disappeared for unknown reasons. Maybe they went extinct through some unknown war or the empire slowly fell apart, leaving colonies to face their own fates by themselves or maybe they evolved to inhabit another plane of existence. The nonhuman Author of the book doesn't know.