Alien Species
Register
Don't have an account?
Sign In
Advertisement
in: The Twilight Zone Universe, Humanoids, Bipedal Species,
and 11 more 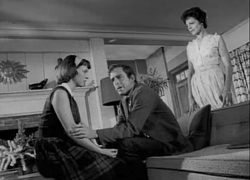 Richard Matheson
An unnamed alien species that is apparently indistinguishable from Humans, hailing from an Earth-like planet in a distant solar system.

Sturkas' species appear completely indistinguishable from Humans, at least in terms of physical appearance. Any differences in physiology involving size, organs, lifespan, and other bodily functions are unknown.

This species was known to have at least two distinct factions among them, who were rivals moving closer and closer to war, mirroring the political rivalries of Earth's Cold War. Within at least one of the factions, which bore a close resemblance to the United States, or the West in general, at least some members of this species were known to frown upon thoughts dissenting from a strong belief of a war to be won swiftly. Other parallels to mid-20th century Western cultures were seen throughout their society. In the Sturkas' faction, technological developments were handled by a government organization known as the Ministry of Science. Names within this species were mostly identical to common Western names, and their language was one very close to 20th century English. In addition, their measurements of time appear to be the same as Earth's.

Almost all technology seen among the species appears to nearly identical to technology that could be found in mid-20th century Earth, including weapons such as hydrogen bombs. However, certain items had several notable differences, such as telephones, which resembled handheld models to some degree, but had a more angular appearance and a rotary dial on their underside. Their automobiles, while outwardly nearly identical to common Earth models present in the West, emitted a sound closer to that of a jet turbine, implying a different sort of engine was in use. Most notably, the species had constructed a flying saucer-shaped spacecraft with the capability of traveling to another solar system in a few month's time.

Two rival factions among this species were locked in a cold war, building up arsenals and preparing for a nuclear exchange. William Sturka, employed at a military base to produce H-bombs, saw an impending nuclear war, and knew the only outcome would be mutually assured destruction. Alongside his friend Jerry Riden, a test pilot for an experimental spacecraft, he planned to escape the planet with their respective families. At some point while testing the spacecraft, their faction's military detected radio signals from Earth, determining Earth's location and deciphering Earth English. They plan for two months, and when Sturka hears from a co-worker named Carling that war is coming in 48 hours, also receiving a chilling warning from Carling when he voices his feelings of incoming doom, he decides to put the plan into action immediately. Sturka first informs his wife, and has his daughter Jody stay home instead of going on a planned date, meeting with Riden and convincing him to leave that very night. Carling eavesdrops, suspecting them of planning something radical, and arrives that night. The Sturkas, accompanied by Riden and his wife, were playing cards, with Riden using the card game as cover to reveal the location of Earth, their intended destination for settlement. When Carling arrives, he implies that he knows their plan, but does not catch a glimpse of the plans. However, he drives directly to the airfield where the spacecraft is being held, and takes over watch duty.

The Sturkas and the Ridens attempt to get to the airfield after packing their things, as Riden had bribed personnel to leave the ship fully fueled and stocked with several months of food. They signal their contact to open the gate, but Carling reveals himself, holding Sturka and Riden at gunpoint while opening the gate to confront them. However, Jody uses the car door to knock Carling's gun away, allowing the men to subdue him and drive to the ship. They fight off guards that are sent after them and quickly take off, escaping their planet shortly before its nuclear devastation, setting a course for Earth. Because of this, it can be assumed that the Sturkas and the Ridens are the last of their species.