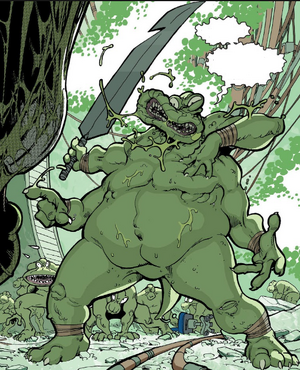 The Stronquet are alien species from another dimension in the multiverse.

Parasites that travel from dimension to dimension pillaging any civilization they come across. According to the leader they conquered hundreds of thousands of civilizations. They were encountered by the Judge of Mega-City One when scientists accidentally opened a door to their world. The cadet Judges managed to destroy the portal and send them back, save only the leader who they imprisoned in an Iso-Cube.

Retrieved from "https://aliens.fandom.com/wiki/Stronquet?oldid=161607"
Community content is available under CC-BY-SA unless otherwise noted.