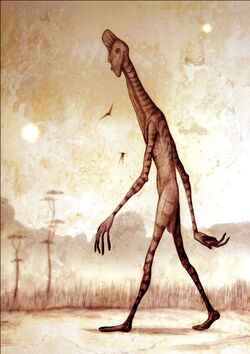 A moon of Jupiter-like planet

Nemo Ramjet
The Striders were a posthuman species descended from the Star People. They lived on a Jovian moon with only one-fifth of the Earth's gravity.

On their moon, the grass would reach 10 meters high and the trees would be the height of skyscrapers. The entire ecosystem on this moon would be the remnants of pets and vermin from the previous human civilization. The Striders were one of them, as a race of gargatuan humanoids wandering across the barren land.

The anatomical structure of the Striders were so fragile that even a strong blast of wind could kill them. However, the moon didn't have these extreme circumstances and the Striders would be able to survive for a long time. Two million years after the Qu left the moon, the poultry brought by the Star People for food source descended to a giant predatory bird. Because the Striders didn't have any defense mechanism, they were hunted to extinction by the predatory chicken.