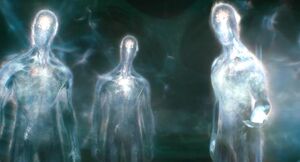 The Strangers are a mysterious alien race of hyper advanced beings that appear in the 2009 film Knowing. They are presumed to be a Type 3 Civilization, given their biological and technological advancements.

The Strangers' intentions in the film remain relatively unclear and unexplained, due to how they appear in their true form for a brief amount of time at the end of the film, and the fact they possess no form of verbal communication. It is implied that they used their telepathic form of speech to warn human children who had the ability to hear their telepathic voice about impending disasters on Earth. One child named Lucinda Embry in Lexington, Massachusetts had the ability to hear their voice and wrote down a page full of coordinates, dates and death tolls of impending disasters that would occur in the next 50 years. Before Lucinda finished the page, it was then put in a time capsule filled with drawings of children's interpretations of the future in 50 years as a project funded by William Dawes Elementary School. In an attempt to finish her message, Lucinda scratched the remaining numbers on the door of the school closet with her bare hands the night after the time capsule was buried. 50 years later, the capsule was resurfaced and the future depictions were given to the future children of William Dawes Elementary School with Lucinda's being given to a young boy named Caleb Koestler, who also has the ability to hear the Strangers' speech. After closer examination from his father John Koestler, he discovers the future predicting nature of the paper. He later discovered that Lucinda died of a medication overdose and predicts a few disasters using the paper such as the crashing of a commercial plane and the derailment of a Manhattan subway train, which he failed to prevent. He and Lucinda's daughter Diana Embry then investigated Lucinda's old mobile home and discovered that the casualty number for the last set of numbers on Lucinda's paper "33" was actually "EE" in reverse which meant "Everyone Else". Outside the mobile home, John confronts one of the Strangers, in the form of a human man, who disappears instantaneously, and they learn that Diana's daughter Abby Embry can hear the Strangers' form of communication as well. It was later discovered by Earth's astronomers that a massive solar flare was heading towards the Earth's orbital path and would cause an apocalyptic event, which the news ultimately erupts panic. After investigating the school closet in which Lucinda had her episode, John noticed that what Lucinda wrote was another set of coordinates which led back to her mobile home and suggests that there is some refuge from the impending disaster. Diana suggests that she take Caleb and Abby to a set of underground caves as shelter and attempts to do so without telling John. The Strangers then kidnap Caleb and Abby with Diana chasing after them. Diana later died when her vehicle was later broadsided by a truck. The Strangers took Caleb and Abby to the hidden shelter near Lucinda's home with John witnessing as the Strangers shift from their human forms into their true form and take Caleb and Abby into their ship which, along with various other Stranger ships housing human children, took them to a far off distant planet to continue humanity's existence. John later traveled to Boston to spend the last few minutes before annihilation with his family and dies as the Earth is scorched.

It is unknown why the Strangers chose to warn humanity of their impending destruction and aid in their survival by taking various children with the ability to hear their telepathic speech to a heavenly distant planet and continue humanity's existence outside of generosity and general care for the welfare of humanity. We do not know what happened to the children in the end, but what we do know is that they are safe and with other kids on another planet. However, without the guidance of the adults, the children might end up in the situation similar in Lord Of the Flies. As the result, it is quite foolish for the Strangers for not trying to evacuate the adults.

The ending of the film, with the Strangers taking human children to a distant planet, is often regarded for drawing parallels with the Rapture story in Christianity of how, when the Apocalypse comes, the pure and faithful people would be taken to Heaven as the Earth is destroyed by the demons of Hell while every other human left burns in agony. The Strangers themselves are said to represent angels due to their heavenly appearance and how the streams of light behind them resemble angel wings. The alien planet shown in the last scene of the film is somewhat presented as similar to the Garden of Eden with Caleb and Abby representing Adam and Eve.

Retrieved from "https://aliens.fandom.com/wiki/Stranger_(Knowing)?oldid=199789"
Community content is available under CC-BY-SA unless otherwise noted.