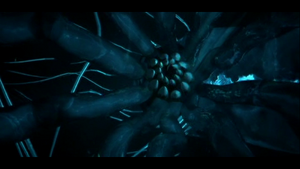 The Strangers are an endangered parasitic alien species, that abducted humans and brought them to a city-like space station, experimenting on them in an attempt to prolong their life.

The exact origins and biological nature of the Strangers are unknown, such as the name, location and ecology of their homeworld. Considering their dislike of light and aversion to water, it is likely that they were some sort of creature that resided underground on an arid planet or in otherwise arid climates, much like a desert. However, what is certain is that they are a highly intelligent parasitic species on the verge of extinction. The Strangers inhabit the dead human beings, using their physical forms to carry out their experiments. They're given the name Strangers by the few humans that know of their existence, symbolizing their alien and haunting behavior.

As to how they came to Earth to abduct humans, there is no definite answer. Dr. Shreber, a human psychiatrist working for the Strangers, says that before they came, "There was darkness", which tacitly suggests a catastrophic phenomenon on Earth prior to the Strangers' arrival, either caused naturally or by the Strangers themselves. It is also unknown exactly when the Strangers abducted the humans, or how long the experimentation has been going on.

The unnamed dark city is the primary setting of the film, and home to the Strangers and their experiments. The city itself is a controlled environment, an enclosed maze suspended in space, supported by great machines, meant to study the (independent) variable of memories and how they affect the (dependent) variable of human nature, particularly behavior, relationships and the phenomenon of the human soul.

The Strangers believe the answer to prolonging their life lies in these unique characteristic of humans, indicative of their desire to be more like their subjects.

The city is also devoid of sunlight and large water bodies, as the Strangers are photophobic and have a strong aversion towards water.

The Strangers live below the city, which houses the great machines that control the environment as well as the base of operations where Dr. Schreber synthesizes memories, used as independent variables, to be injected into the humans subjects. Below the city is also where the Strangers communally meet to discuss their plans of experimentation. It is implied that there are hundreds of Strangers in the city, each with their own tasks with regards to the experiment, (i.e. manufacturing parts, rearranging people, etc.)

Somewhere below the city, there is a giant clock and a giant globe-like machine both used by the Strangers as proponents in controlling time and the city landscape, respectively. The clock, when shut down, causes temporary comatose in all the subjects, (which could possibly indicate an initial chemical injection in the subjects that induces sleep at command). This gives the Strangers and Dr. Schreber time to rearrange peoples’ position and implant them with fabricated memories, creating new long-term memories, as part of the experiment.

The unnamed globular structure is used to change the cityscape. The Strangers have an ability to Tune (see Biology, Abilities for more details). Collectively, they can Tune and focus all at once at the globular structure, whose changes reflect a change in the city, be it the erection of a new building or even the improvement in the layout of the room. They make physical changes in the city to be consistent with the changes in memory.

Making all these major changes is known is as Tuning, which the Strangers actually do on a roughly 12 hour basis (due to the city residing in a permanent night, the Tuning ritual is preformed at 00:00/12:00 a.m. - which as mentioned, rather than 24 hours elapsing from the previous ritual, it takes merely 12).

The original form of the Stranger resembles a spider, though more gelatinous in form. The color of its body is translucent blue moves in a fluid-like behavior. The addition of numerous tentacles from the side of its body make it look more like a jellyfish in some angles. Beneath the body houses an orifice (most likely its mouth) surrounded by protective teeth-like appendages. The true form of the Strangers are observably 1–2 feet in size, though the Stranger hidden in Mr. Book (the highest ranked Stranger), was shown to be about 6–8 feet.

The true form of the strangers render them incapable of abducting humans or carrying out their experiments. According to Mr. Hand, one of the senior Strangers, they use the dead as “vessels”. The Strangers therefore use dead bodies as their hosts. Though the Strangers have some level of individuality, they all generally look and dress alike. They are pale white, bald, have sharp facial features, and quite walk elegantly. They are capable of displaying simple human expressions, though there is no evidence they are genuinely feeling any semblance of human emotion.

Not much details are given about the original form of the Strangers. The significance of the assumed mouth, tentacles, and body shape are not disclosed, though most likely they are used in part of attaching and revitalizing the dead body.

The Stranger takes full control of the dead host’s brain, reviving only the physical functionality of the deceased. No memories, mannerisms, emotions or any aspect of the dead man’s former life is exhibited in the Stranger’s humanoid body.

The Strangers, though can express some form of individuality, try to function as a singular unit, characterized as having a “group mind”. They have a shared consciousness, and generally believe in the same principles and attitudes, though they are capable of disagreeing with each other on important matters from time to time. Despite this though, they all work together to try and save their race.

“Tune” is a specific name of the psychokinetic power that the Strangers use to control reality itself at will. They can create and modify objects according to their will, although not without the machines to help them, and individually it seems that said power and scope of it is far weaker. The ability to Tune emits a concentrated wave of energy from their forehead which can be used for everything from controlling the movement of objects and people, to inducing sleep and even levitating. This is the power they use simultaneously with the globular machine, as the Stranger’s concentrated focus is what builds and shapes the cityscape - the globular machine is likely an extension of the aforementioned machines that allow them to Tune, or an amplifier that allows them to Tune a given object without requiring line of sight..

Another problem for the Strangers is counter-tuning, when Tuning is used against them. This initially isn’t an issue because the Strangers have a collective consciousness. However, this becomes a problem when John Murdoch is able to Tune as well at a greater intensity, which he uses to fight and eventually defeat the Strangers.

Though they admit that humans have the unique characteristic of a “soul”, the Strangers have little regard for their subjects, and see them just as that. They do not interact with or live among the humans (with the exception of moving them around during the Tuning), and feel no remorse for their situation and are even willing to kill them if necessary. They consider them like lab mice, relentlessly experimenting, treating each as expandable and being ignorant to the demolition of their life and free will.

As mentioned earlier, though they have a collective consciousness, there is some level of individuality amongst the Strangers, noted in their slight disagreements with each other and the fact that they have names, (though they are only given simply names). There is also a hierarchy in their society, observed in how they all seem to respect certain members more, like Mr. Hand and Mr. Book. It also seems that ability to tune is reflective of their rank in the society.

Mr. Hand is a younger, more rash, yet intelligent Stranger. He is in-charge of bringing in John Murdoch, who the Strangers believe is the ultimate key in understanding the anomaly of the human soul. Mr. Hand tries a rash experiment, to be injected with the fabricated memories of John Murdoch (which has never been done to a Stranger) in order to understand him more and know his next moves. In the end though, he is eventually weakened by this procedure, inevitably leading to his death.

Mr. Book is the leader of the Strangers, making most of the major decisions for them. He is intent on bringing in John Murdoch for further study. He battles John in the end, eventually losing to John’s greater tuning abilities.

John Murdoch is the main protagonist of Dark City. John is not a Stranger, though he possesses the psychokinetic abilities of tuning. It isn’t mentioned but it may be related to the fact that he accidentally wakes up during a Tuning, being implanted with the memories and history of a serial killer. The Strangers wanted to test if he would act according to his memory, even though John Murdoch isn’t a killer.

Dr. Schreber, the memory implanter, realizes that John Murdoch has the ability to stop the Strangers and end their experimentation once and for all. He schemes behind the Strangers’ back, producing a fabricated memory of John learning everything about the Strangers and their psychokinetic abilities. It is the implantation of this memory that helps John fully utilize his abilities, enough to finally defeat the Strangers. John realizes he has the capacity to create and destroy things, like the collective concentration of the Strangers and their machines, but by himself, only be sheer will. He chooses to create the world from his fabricated childhood and tries to restore some semblance of a decent life from their former home.