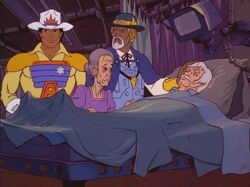 A patient suffering from the virus.

The Strain 25 Space Virus is a dreaded virulent organism that can infect various species of sapients, as well as likely many other non-sapient organisms; it appears to be similar to a highly deadly version of influenza. Its homeworld is indeterminate, and it is presumed to have originated from space as opposed to a planet. An inhabitant of New Texas somehow contracted the "virus", where he was then watched over intently by both his wife Stella and the local doctor, Doc Clayton.

A serum for it exists, although those of Orpheus II did not have any at the time it was required on New Texas, as they had never had a use for it themselves. The serum was found elsewhere within a days' time, and while there was a holdup with the medicine, it was administered and Charlie survived. No other cases have been known to have been reported.