Stone Creatures, as their name suggests, are humanoid or animalistic creatures made of stone, and can have pink or yellow runes on their skin. They also have pink, yellow or white eyes with no pupils or pink ring-like eyes. They have three or four digits on their hands and feet.

Stone Creatures are capable of using magic. They can also manipulate Mana but some of them have white Mana instead of pink. They are also physically strong, and can recover from injury faster than Humans.

Stone Creatures as seen in the original series.

A Stone Creature as seen in Alien Force and Ultimate Alien. 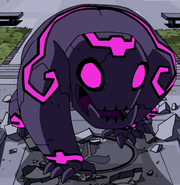 A Stone Creature as seen in Omniverse. 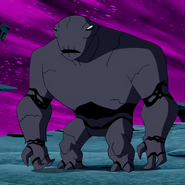 A bat-like Stone Creature
Add a photo to this gallery
Retrieved from "https://aliens.fandom.com/wiki/Stone_Creature?oldid=168260"
Community content is available under CC-BY-SA unless otherwise noted.