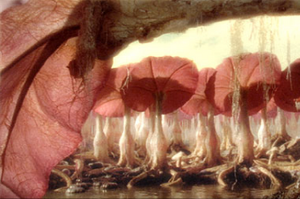 The Stingerfans are half flora, half fauna life forms native to planet Aurelia. They look like plants, but their roots have muscles and act like slow moving tentacles. The Stingerfans also have five hearts. But they do utilize photosynthesis and multiply by growing young Stingerfans from the adults' tentacles.

In few words, Stingerfans are photosynthetic autotrophic fauna native to Aurelia that reproduce by budding like hydra do on earth. The Stingerfans close their fans during a solar flare, and reopen them when the flare subsides.

Their roots are pierced and eaten by mudpods, who fell their tall bodies to build dams. Those same fallen Stingerfans also provide shelter to Gulphogs who hide from the searing heat of the solar flares.

Retrieved from "https://aliens.fandom.com/wiki/Stingerfan?oldid=180233"
Community content is available under CC-BY-SA unless otherwise noted.