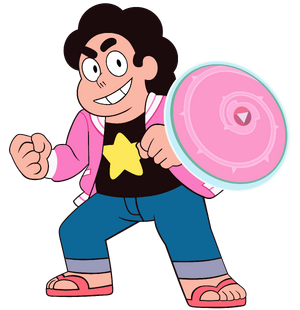 Steven Quartz Universe is a Human-Gem hybrid who is son of musician Greg Universe and former Homeworld matriarch Pink Diamond.

When 14 years old, Steven usually wore a pink shirt with a yellow star in the center, blue jeans, and pink sandals. Steven's gemstone, inherited from his mother, is located on his navel, and is pink in color with a pentagonal facet.

When 16 years old, Steven is slightly taller and still wears blue jeans and pink sandals, but now wears a pink jacket and blue or black shirt with a yellow star in the center.

When corrupted, Steven has a reptilian body with scaly pink skin, light pink thorns across his body, and prominent fangs. His gemstone is still located on his navel, but appears smaller due to his massive size.

Steven is a very unique being with innate powers that are beyond any normal human or Gem. Once pregnant and evenusally given birth by Pink Diamond who was better known as Rose Quartz, had gave up her form to bring him into the world since they both couldn't exist.

Much like his own mother, Steven is a kindhearted person who devoted to protecting humanity and helping others, despite how cruel they could seem at first, he somehow believed there's good in even most ruthless of Gems and would then try to befriend them.

About two years after reforming the Gem empire from its previous imperialistic nature, Steven began teaching at Little Homeschool alongside all his Gem friends until when his mental health gradually deteriorated, causing him to transform into a pink reptilian monster due to seeing himself as one. However, he was soon healed by both his friends and family who were able to change him back. Sometime later, Steven decided to leave Beach City in order to find his purpose in life.

When angered, Steven glows pink, giving him several more abilities such as enhanced speed and a powerful destructive scream.

When corrupted, Steven possesses a degree of enhanced strength, can still jump over long distances, and possesses a powerful sonic roar that causes his eyes and horns to glow white. 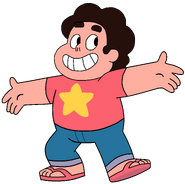 Monster form
Add a photo to this gallery
Retrieved from "https://aliens.fandom.com/wiki/Steven_Universe?oldid=185672"
Community content is available under CC-BY-SA unless otherwise noted.