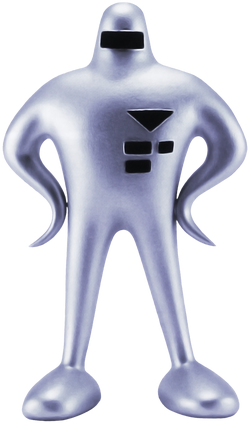 Starmen are a race of extraterrestrial cyborgs which are commonly known for using PSI. They obey Giygas.

Starmen have platinum skin/suits and their heads appear to be directly connected to their shoulders, with no discernible neck. They have a black, horizontal eyehole, so they can see and 4 black buttons on the left side of their chest. They have no digits on their hands and they have shoe-like feet.

Starmen can use many PSI in many ways, including PSI Shield and PSI Starstorm.

Starmen can travel to other dimensions.

When Starmen move around, they teleport.

Starmen are part organic, part synthetic. They are synthetic because In Mother 2, Starmen use katakana script, which is a common way to donate robotic-sounding speech. The English version lacking this gives them "whirs", "beeps" and "clicks" which indicates that they are robotic. However, they are also organic because any Starman of any kind can't be harmed by the Rust Promoter which only harms robots.

A Starman Deluxe
Add a photo to this gallery
Retrieved from "https://aliens.fandom.com/wiki/Starman_(Mother)?oldid=177396"
Community content is available under CC-BY-SA unless otherwise noted.