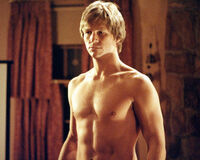 An unknown buzzing language. He can also learn the languages of other species when wearing an "environmental suit".

Touchless interaction with technology, adaptation through the "wearing" of environmental suit and generation of several silver spheres of advanced technology

Returned into his homeworld, environmental suit might be dissolved

Jeff Bridges
Starman is a member of an energy-based species who crashlanded on Earth. His true name is unknown.

Starman seems to be a member of a species made up of energy, as his "true form" is simply a ball of light. He is a part of a peaceful race who find interest in exploring other worlds and observing other life forms.

Starman also seems to be immortal and does not need food to survive in his true form, as he complained about hunting.

When Starman arrives on Earth, he scans a simple strand of DNA to create an "environment suit" by cloning a body based on the DNA code and transforming into it.

When creating an environment suit, Starman also creates seven silver spheres that can be used for different tasks such as communicating with his race, generating hologram displays, creating energy force shields, healing/reviving lifeforms and destroying items such as handles and even forests among other uses. It is implied that Starman has omnipotence by the usage of the spheres.

Not much is known about the history of Starman's race. Whether they originated as energy beings or evolved into such through years of evolution is especially unclear. What is known, however, is that they have frequently explored Earth.

The launch of Voyager II unwittingly attracted on a particular member of Starman's race—Starman himself—to Earth, after his people brought Voyager II aboard their ship and analysed the contents inside their mothership. When he flew to Earth, he was engaged by a pair of fighters and his "observation craft" was shot down. Having survived the crash, he travelled to a nearby house, and scanned a lock of hair to create an environment suit resembling that of a dead man named Scott Hayden. After sending an "emergency transmission", he forced Scott's terrified widow Jenny to take him to Arizona where he could rendezvous with his ship in where he referred to in the transmission as "Landing Area One" - which would have to be within 3 days or he would die.

Over the course of the journey, Starman struggled to understand Earth's society - complicated by Jenny's initial attempts to escape from him. He slowly learned to speak English with some help from Jenny, and developed a particular fondness for Dutch Apple Pie - with Jenny deciding to help him after seeing him use one of his spheres to bring a dead deer back to life that a hunter had killed. Eventually Starman began to experience what is known as love, shown as when he saved Jenny after she was fatally wounded and brought her back to life. As a gift for her, he gave Jenny a baby boy after making love to her (she was previously infertile and unable to give birth) - explaining the baby would be the son of her and her deceased husband but also his, with the baby having Starman's knowledge and growing up to become a teacher. Although saying he would stop it if she didn't want the baby, Jenny accepted her gift from him and, upon her request, Starman pointed out where his 'star' was - so she could later tell her child where 'his father' came from.

With some help from a SETI scientist, Jenny and Starman were finally able to make it to the rendezvous point in Arizona - despite military helicopters trying to prevent them from reaching the centre of the crater, where a large spaceship came to pick him up, presumably taking him back to his homeworld. Before leaving, he gave the last of his spheres to Jenny - stating her child would know what to do with it.

Ability to generate a HUD render

The Starman, having generated an environmental suit

The mothership and observation ship

The observation ship, shown to pass a planet.

...compared with the interior of the ship, which seems unfinished

Add a photo to this gallery
Retrieved from "https://aliens.fandom.com/wiki/Starman?oldid=167656"
Community content is available under CC-BY-SA unless otherwise noted.