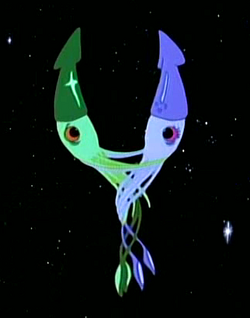 Starmakers are a species of large, squid-like aliens that live in space. Only one family is left alive in the galaxy (both parents currently dead: the father eaten by a Space Whale, while the mother peacefully passing on: while the young levitating through flying pass the atmosphere and creating new stars).

As their name implies, Starmakers are capable of creating new stars with just a small wave of their tentacle. In their world, they are responsible for making all of the stars in the sky. They are easily capable of moving through space through jet propulsion, though are unable to fight against the gravitational pull of some planets upon breaching their atmosphere.

Retrieved from "https://aliens.fandom.com/wiki/Starmaker?oldid=184949"
Community content is available under CC-BY-SA unless otherwise noted.