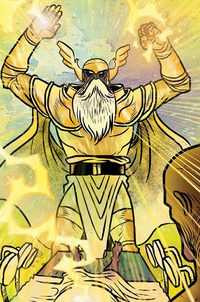 Starlok is the Lord of the Lightriders in the Black Hammer Universe.

From the dawn of time Starlok waged a war against his evil brother Anti-God for the fate of the cosmic balance. He was aided by his loyal warriors the Lightriders in keeping the mad despot at bay.

Starlok became familiar with Weber’s family especially Lucy Weber, Joe’s daughter who called him Grandpa Starlok. Joe would later seek out Starlok’s help to heal the wounded Metal Minotaur, his archenemy but also a woman he respected. Using his power he saved Metal Minotaur‘s life but she was left permanently crippled.

On Lucy Weber’s tenth birthday Starlok called to Joe to aid the Lightriders as Anti-God had stormed New World and defeated most of their defenses. Joe refused so as to b with his daughter. His choice costed the Lightriders their lives, leaving Starlok without his warriors and Anti-God turning his sights in Earth.

The Black Hammer regretful of his decision was present with Starlok on New World, who summoned forth several retired heroes, Madam Dragonfly, Barbalien, Golden Gail, Colonel weird, and Abraham Slam. Starlok explained the situation to the veteran heroes an appealed them to fight Anti-God. The fate of Earth looming over the shoulders the heroes then decided to work together.

Retrieved from "https://aliens.fandom.com/wiki/Starlok?oldid=175582"
Community content is available under CC-BY-SA unless otherwise noted.