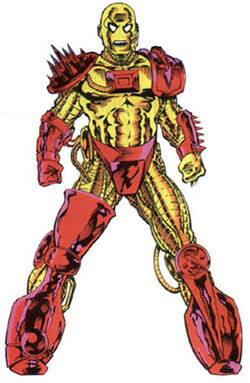 Marvel Comics
The Stark are a species of purple-skinned semi-humanoid warriors ruled by a matriarchal society, which are only known to exist in Earth-691's timeline.

A rocket launched by Anthony Stark, carrying advanced technology, crashed on an alien world, landing near a tribe of primitives. The tribe eventually overcame their fear of the crashed vessel, and investigated discovering the cache of Stark technology.

Over the centuries the Stark would study and learn from the technology developing into an industrial civilization. The young race even rename their race and their planet after their new, iron-clad god Tony Stark.

The Stark soon began conquering other worlds for their resources, ruining them as they had ruined their own world.

The Stark of every member of their race possesses a custom suit of armor as a form of racial pride. The Stark lived a golden age of technological achievement. However, their emulation of Tony Stark eventually depleted the resources on their planet, polluting the air, and eventually forcing all the Stark in artificial domes.